The Agony and the Austerity of Paul LePage

Do not be fooled by Gov. Paul LePage’s faux-populist rhetoric which he adopted in his recent State of the State address. His asinine plan to completely eliminate the state’s income tax will not make Maine more economically prosperous.

Indeed, the only people who will benefit from such a scheme are the very wealthy, while Maine’s working poor will be disproportionately burdened with a higher sales tax (6.5 percent), and increased prices on consumer goods.

It is a fiscal framework straight out of the Milton Friedman-playbook. In LePage’s warped thinking, lower-to-nonexistent income taxes will encourage more businesses to flock to Maine, while the rest of us simply wait for the wealth to “trickle down” our way. It is the same sort of free market capitalism both Republicans and Democrats have subjected the country to for the last 30 years now.

According to a study by the nonpartisan Congressional Research Service and cited by Business Insider reporter, Henry Blodget in a 2012 story, “there’s no evidence that tax cuts spur growth” (“Bombshell: New Study Destroys Theory that Tax Cuts Spur Growth,” 09/21/2012). Blodget writes:    “[T]here is no correlation between GDP growth and the top marginal tax rates.” (Italics his.)

Blodget notes, however, one thing lower tax rates do contribute to is income inequality. We currently live in an age of unprecedented wealth inequality, in which the top one percent of Americans control close to half of the country’s wealth.

LePage, along with similarly extremist Republican governors like Wisconsin’s Scott Walker, New Jersey’s Chris Christie, and Florida’s Rick Scott, wants nothing less than the eradication of the already beleaguered social safety net. These austerity measures come on the heels of an equally odious law that requires food stamp applicants submit to drug-testing, and an abrupt end to the state’s municipal revenue-sharing. 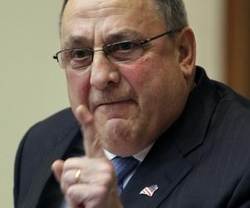 The irony is many of those who will be most affected by LePage’s budget are the same blue-collar, working-class Mainers who sent him back to the Blaine House last November. Under LePage’s budget, all of the recreational activities these Mainers enjoy–snowmobiling, hunting, spectator sports, drinking–would become a lot more expensive.

LePage, like President George W. Bush, was sold to Maine voters as an “Average Joe.” His crass, petulant demeanor and juvenile public remarks appeal to uneducated Mainers, especially those in the northern, more rural half of the state.

LePage’s supporters insist he is “not a politician,” an infantile claim belied by the very fact that he has successfully campaigned–twice–for the highest office in the state.

As the late Joe McGinniss explained in his seminal book, The Selling of the President, Americans do not so much “vote for a candidate as make a psychological purchase of him.”

Examining how the advent of television forever altered the way politicians are marketed to us, McGinniss writes:

Television seems particularly useful to the politician who can be charming but lack ideas…. His personality is what the viewers want to share. He need be neither statesman nor crusader; he must only show up on time. Success and failure are easily measured: how often is he invited back? Often enough and he reaches his goal–to advance from “politician” to “celebrity,” a status jump bestowed by grateful viewers who feel that finally they have been given the basis for making a choice.

“Style becomes substance,” he writes. “The medium is the massage and the masseur gets the votes.” 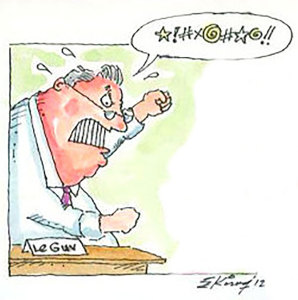 LePage is backed by the most retrograde corporate interests in the nation. In last year’s midterm election, LePage’s corporate donors included such heavies as Wal-Mart, Microsoft, Anthem Blue Cross, Bank of America, and Anheuser-Busch. Likewise, LePage is a member of the secretive corporate lobbying group, the American Legislative Exchange Council (ALEC), according to a 2011 story in the Portland Phoenix by local investigative journalist, Colin Woodward (“LePage’s Koch Brother’s connection revealed,” 09/07/2011).

And, despite his own hard-luck upbringing, the governor has made his disdain for poor people quite clear. During the 2012 Maine Republican Convention, LePage berated welfare recipients to “Get off the couch and get yourself a job!”

Meanwhile, the amount spent annually on corporate welfare–in the form of government handouts, subsidies, tax cuts, and bailouts–far exceeds anything individuals on general assistance are getting. Yet, LePage, to my knowledge, has never referenced this discrepancy in policy. Instead, he spent $700,000 in taxpayer money to uncover a mere 45 instances of welfare fraud in 2012.

And before readers start bemoaning U.S. Rep. Mike Michaud’s gubernatorial loss last fall it is worth remembering Maine Democrats proposed virtually the same budget plan in 2009. The fact is, even at the state level, our rigid two-party electoral system makes it impossible to vote against Wall Street.

LePage is no populist. Indeed, he and his Republican colleagues that now control the U.S. Congress want nothing less than the dismantling of what is left of the social safety net.

And unless we organize now to fight back, Maine citizens will get exactly what they voted for.

Adam Marletta is a writer, activist, and reporter. He can be contacted at adamd.marletta@gmail.com.