A Tribute to Bridget Chase

Editor’s Note: WEN Volunteer Contributor Bridget Chase, 58, of Pine Street, Portland, passed away on August 7th, of late complications due to treatment of Hodgkin’s lymphoma as a teen. Readers knew her best for her diligent work covering and advocating for the Portland pesticide ordinance. 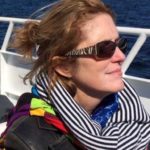 Few people loved Portland, and specifically the West End, as much as my cousin, Mary “Bridget” Chase. When I first moved here, she took delight in hearing about my discoveries in my adopted hometown. To me Bridget was everything Portland is – beautiful, graceful, charming and quirky.

Growing up, Bridget was my pretty younger cousin – like me, the oldest in her family. There were years I rarely saw her except for the occasional family gathering. But when I moved to Maine, it was as if we had been close forever.

It seems unbelievably trite to say that Bridget made me want to be a better person, but she did. She was just so kind. She was devoted to the people in her life. If you were happy, she would plan a celebration. When you were hurting, she would think of ways to distract and delight you.

Bridget passed away in August, just a few days shy of her 59th birthday, from late complications from Hodgkin disease. She had lived with the gift of a heart transplant for five weeks before succumbing to complications.

Bridget was a lover of the arts and a fierce advocate for environmental causes. Most recently, she reported on the development of a city pesticide ordinance for the West End News.

Bridget’s heart may have been weak, but it made room for everyone. The last thing she texted me, on her way down to Boston for transplant surgery was that she loved me.

The other day I finally mustered the courage to walk past her Pine Street home. It was all at once sad and so very lovely – just like Bridget.