Posts
Home Featured Commentary Michael and Me: The Frustrating Brilliance of Michael Moore

Michael and Me: The Frustrating Brilliance of Michael Moore 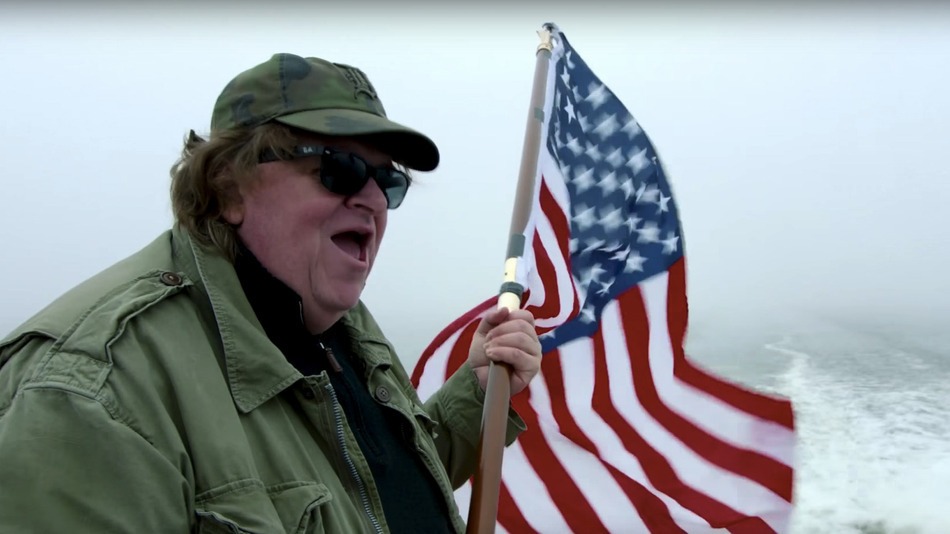 Image from Michael Moore’s latest documentary, “Where to Invade Next,” currently playing at Portland’s Nickelodeon Theater.

Few liberal figures are as simultaneously brilliant and frustrating as Michael Moore.

As a filmmaker, Moore has produced an impressive canon of intelligent left-wing documentary films that serve as both exemplary political agitprop as well as cleverly witty entertainment. Moore, perhaps to a greater degree than any other contemporary filmmaker, has elevated the documentary genre from a seemingly stuffy, high-brow form of “serious” film, to one with mass commercial appeal.

In doing so, he has proven the old adage that “truth is stranger than fiction,” or as the perpetually disheveled showboater infamously stated upon accepting his Academy Award for 2002’s Bowling for Columbine, “We [documentary filmmakers] like nonfiction because we live in such fictitious times.”

Yet, in his off-screen activism and political advocacy, Moore often, perhaps unwittingly, undermines his films’ arguments.

Case in point, 2007’s Sicko offered a devastating critique of our pay-or-die private health care system in which corporate health insurance providers have a perverse profit-incentive to deny coverage to the sick and the dying.

But during the ensuing presidential election which closely followed that film’s release, Moore did not, as Sicko viewers might have expected, support the only candidate calling for a single-payer, universal health care system–Ralph Nader. Instead, Moore, rather predictably, backed Barack Obama, whose sole on-the-record commitment to single-payer essentially starts and ends with one passing campaign rally endorsement. No sooner had Obama assumed office than single-payer was promptly shoved “off the table,” along with other constitutionally imperative legislation like ending the criminal war in Iraq and impeaching the draft-dodging warmongers that launched it.

Moore, like so many other leftist celebrities, was initially one of Nader’s earliest supporters. In a highly charged address at one of Nader’s “super-rallies” in 2000, Moore reminded the massive audience that when you vote for the supposed “lesser of two evils,” “You still end up with evil.”

Yet, by 2004, after the corporate media and the Democratic Party had sufficiently smeared Nader’s stalwart reputation–blaming him, rather than the right-wing Supreme Court, for Gore’s “loss”–Moore, Pearl Jam’s Eddie Vedder, and other liberal A-listers had abandoned Nader–and independent politics in general–for John Kerry. Fifteen years later, Moore has nothing good to say about Nader and remains firmly in the Democratic camp. He has followed the rest of the liberal intelligentsia in supporting Bernie Sanders’ ill-fated campaign for president.

(Indeed, in the March 23, 2010 episode of Democracy Now! linked to above, Moore espouses the so-called “inside-outside” strategy long favored by left-wing activists like Todd Gitlin, Eric Alterman, and Michael Harrington. This strategy is more commonly known as “taking over” the Democratic Party and its track record of abysmal failure is well documented, from Jesse Jackson, to Dennis Kucinich, to Howard Dean. Moore tells hosts Amy Goodman and Sharif Abdel Kouddous, “The game is rigged in America when it comes to third-parties. . . [I]f. . .we have these two political parties which are really very much like one party, why don’t we make sure that one of those parties actually is a second party…? And that’s what I encourage people to do. That is my approach.”)

I kept all of this in mind while viewing Moore’s latest film, Where to Invade Next. Moore spends the film “invading” various European countries, as well as Tunisia, intent on stealing their best social programs and bringing them back to America.

Thus, in Italy Moore envies workers’ generous paid vacation time and five-month maternity leave. School children in France, meanwhile, enjoy an hour-long lunch break (which is considered a class) during which they are served actual food–not the reheated cafeteria confections you and I hurriedly shoveled down in-between classes.

In Finland, Moore “steals” the superior public education system, which Finnish educators attribute to the absence of homework and standardized testing, and the fact that private schools are illegal. A tour of a resort-like prison in Norway–where drugs are decriminalized–reveals an approach to law enforcement that emphasizes rehabilitation over punitive punishment. And Iceland’s majority female-lead government prompts Moore to contemplate what U.S. foreign policy could be like if more women were in charge.

With its freewheeling, almost jubilant tone, Where to Invade Next is less the urgent diatribe of Moore’s previous film, Capitalism: A Love Story and 2004’s Fahrenheit 9/11. In fact, the film feels upbeat–even, darest I say, hopeful. (The film’s working-title was, apparently, Mike’s Happy Movie.)

While I think those previous films offered a stronger, more cohesive analysis of the ills of corporate capitalism, I generally enjoyed Where to Invade. I think Entertainment Weekly‘s Chris Nashawaty sums it up best in his (albeit criminally short) review:

“Where to Invade Next is so heartfelt and sincere, it’s tempting to say that Moore has mellowed with age. But beneath its innocent-abroad optimism, the film has a stinging truth that’s hard to ignore.”

Where I think Moore’s latest doc falls short is in pointing the way forward. In other words, how can we advance worker rights here in America so we too can enjoy paid vacation time, maternity (as well as paternity) leave, universal health care, and a generally less stressful and ultra-competitive society?

The solution, which I suspect Moore fully understands but largely sidesteps in this outing, is to overthrow capitalism.

But rather than stating this outright, Moore offers generic, rather pithy calls for shifting from a “culture of ‘Me’ to ‘We,'” and for Americans to invest more time in educating themselves and less watching The Kardashians. These are sound suggestions, certainly. But they ignore the alienating, isolating effects of capitalism which lead so many to seek escapist solace in, among other things, the glamorous celebrity lives of the Kardashians.

Likewise, the film’s final scene finds Moore recalling his participation in bringing down the Berlin Wall in 1989, leading to a metaphor about small cracks in the Establishment becoming large holes, until it eventually collapses. The film culminates with Moore’s rallying-cry, “Chisel. Hammer. Repeat.”

It all makes for engaging–and at times, quite moving–filmmaking. But, as I watched the other patrons silently exit the darkened theater as soon as the credits appeared, I was left wondering what concrete, tangible action–beyond say, supporting Bernie Sanders in Maine’s upcoming caucus–any of them would undertake to create the grassroots movement necessary to actually implement the rest of the world’s “good ideas.”

As always, Moore has given activists a solid starting point for launching a larger, more focused discussion about how to make America “great again,” as one of our more outlandish presidential aspirants would put it. If nothing else, Where to Invade Next is top-notch documentary filmmaking that will prompt audiences to reflect critically on the type of nation they want to live in.

Where Moore loses me is in his mistaken belief that voting for Democrats will actually bring about any of the progressive changes he hopes to implement. Or, for that matter, that voting alone is enough to create meaningful change. Indeed, it would be great to see Moore tackle these very concepts in his next film.