The Cost of Lifting Workers Out of Poverty

Why should we have a living wage? What is the cost of lifting workers out of poverty?

These are important questions that are on a lot of people’s minds right now, thanks to the Green Party’s support for a $15/hr minimum wage in Portland.

If we raise the minimum wage to a living wage, won’t it cause people to lose their jobs?

The short answer is no. Why? 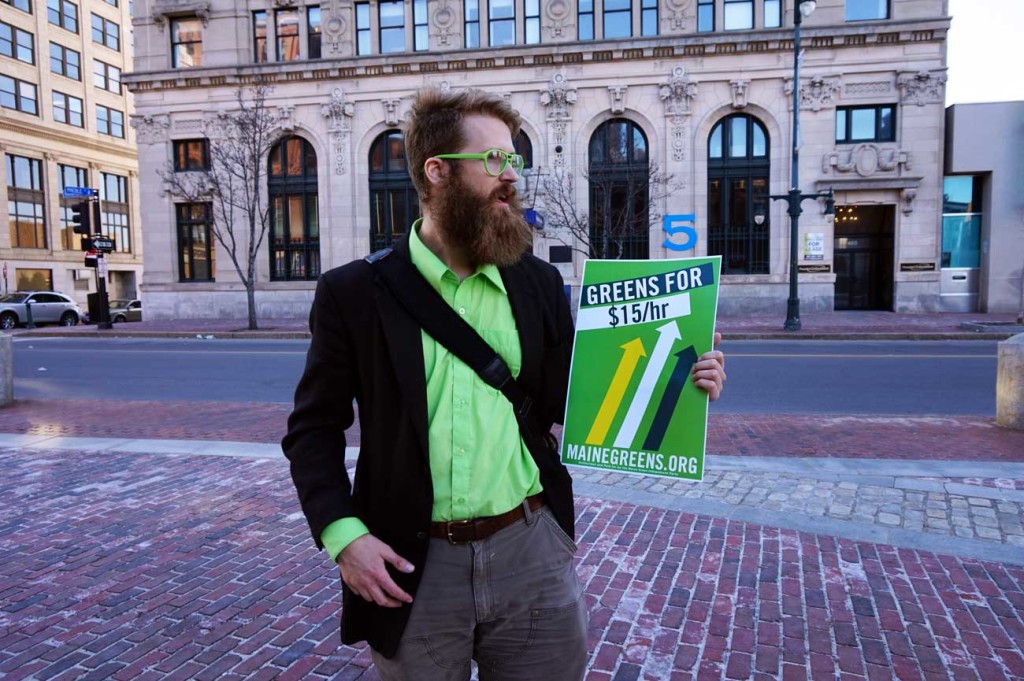 Asher Platts in Monument Square petitioning for a $15 minimum wage.

If you are a businessperson, you don’t break even on the labor of your employees. (Or if you do, you are bad at business.) For successful businesses, hiring an employee is only done if the resulting value created by their labor is well above the cost of their labor. Why? Because that’s where profit comes from!

But won’t doubling the minimum wage cause the price to the consumer to double?

No. When you pay for a $5 cup of coffee, much of that $5 you pay is profit for the employer. Only a small fraction of that cup of coffee goes to pay overhead costs, which can be divided further into raw material costs, utility costs, and labor costs. So the cost of labor actually makes up a small proportion of the $5 that you’re paying. So if you were to double that small fraction of the cost, you will see a similarly small increase in the total cost to the consumer.

Was that a bit too dense? Perhaps that’s hard to grasp at first blush. It’s easy to understand why people think that doubling the wage will result in doubling of prices. Employees are the people that you speak with on a daily basis, not the owners, and you put your money in the hands of employees, and so it feels correct that they keep most of it. But that’s not the case. A critical part of the equation is missing: employer profit.

Raw material costs vary from product to product, but generally are very low. Take a fast food meal that costs $8. The cost of the raw materials involved breaks down to being something like $0.50 per meal. Labor is the magical ingredient that takes $0.50 of raw materials and turns it into an $8 fast food meal.

Now, if we were to reverse the model of compensation, and say that instead of getting a flat hourly wage, instead employees got paid piecework, and assuming there was no profit, a worker earning the federal minimum wage would only need to make roughly one meal every hour to pay their wage.

For the sake of making this argument more realistic, let’s say you’ve got a staff of 4 working in the fast food joint. You would only need to make one $8 meal every 15 minutes to pay the day’s wages.

Over the course of an 8 hour day, that’s only 32 meals per day to pay the labor cost of four employees.

As somebody who has worked in fast food, I can tell you first hand, that in the course of an 8 hour shift, one makes quite a bit more than 32 meals a day. Granted, it’s not steady, there are some busy times when one makes 100 meals in one hour, and other times where an hour can pass where not a single meal is sold, so given that, it’s safe to assume an average of 32 meals an hour, not 32 meals a day.

So now we need to pay our workers. Those 32 meals an hour… remember that less than four of them pay the wage of the 4 employees. Together those four employees cost $30 per hour, leaving $210 an hour left over for the employer.

$210 an hour, over the course of an 8 hour workday, is $1680 a day in profit for the employer. Granted I’m not adding other costs like rent or utilities, but those costs are monthly not daily, and are low compared to profit, so I’m going to ignore them for the sake of this argument.

If you double the wages of the employees so that they are earning $15 an hour individually, or for the four of them together they would cost $60/hr. That would leave the employer with $180/hr in profit, or $1440 in profit per 8 hour shift each day.

That’s still quite good. It’s only $240 a day less in profit for the employer, and now those employees can afford to buy things at the other stores, the stores where the people who eat at this restaurant on their lunch break work.

Let’s say though, hypothetically, that the employer must earn $1680 per shift in net profit, and thus would pass 100% this added labor cost on to the consumer. We can easily calculate that cost to the consumer by dividing the cost of labor over the average number of meals prepared in a day.

So you’d see your $8 meal increase to $8.93, and now the employees have been lifted out of poverty and are earning twice as much.

So the short answer is not noticeably, at least not if a business is following the pure economics of supply and demand and all that jazz. A business could double the prices to $16 per meal and say that it’s because of the minimum wage increase, but such an increase would not be a sound business decision– it would be a political move by a greedy business owner, who wants to turn their customers against doing the right thing.

If it costs an additional $1 per meal to double the wages of low income workers and raise an entire population out of poverty, why not do it?