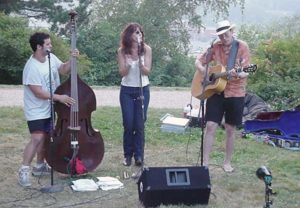 The Piners entertain at the Sunset Folk concert series in the late 90s.

According to Anne Pringle, President of WPNA, the City’s request this year was more than a financial request. The City wanted WPNA  to take over the series, which was beyond WPNA’s capacity. WPNA was very sorry to see the series end and hopes another presenter might come forward for next year.

Ted Musgrave is the City employee who is the face of the concert series. WEN volunteer contributor Bridget Chase caught up with Ted to reflect back on this concert series.

What motivated the City to start the Sunset Folk Concerts?

TM:  The Summer in the Parks concert series was already held in three locations, Kids Concerts at Deering Oaks Park, Tuesday Night Concerts at the Oaks and Thursday night concerts at Fort Allen Park Gazebo. The Western Prom provided a venue for acoustic singers and song writers to showcase their music.

What are some of the most memorable moments of the concert series for you?

TM:  Slaid Cleaves performed at a Sunset concert that attracted over four hundred people, an amazing feat for such a small piece of land.  Another time, the Gunther Brown Band did not miss a beat when the PA system was shut down because of rain showers. They unplugged their guitars and moved closer to the crowd. It was a true acoustical experience until the threat of rain had passed. Lastly, the Sunset series made a point to featured talented teenage songwriters. 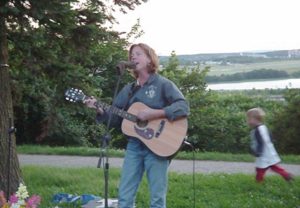 Singer songwriter Darien Brams, was a favorite at the Sunset Series. -Photos courtesy of Ted Musgrave

Which Artists performed the most over the years?

TM:  Darien Brams holds the record. She played twenty or so concerts. Her concerts were well attended and always a blast. Slaid Cleaves played for the first series and many others, even after he moved to Austin, Texas. Other songwriters to play multiple times were Mark Farrington, Jim Gallant, Truth About Daisies and the McCarthy’s.

TM:  I did not take advantage of a chance in 1999 to have Ray LaMontagne perform.

Why did the concert series get cancelled?

TM: Finances and staffing were the reasons the series has ended.  The generosity of businesses sponsors like Oakhurst and Cabot Cheese were invaluable in making these concerts possible. Since 2011, WPNA raised the $1,500 needed to keep the series going. Sadly, the concerts were taking too much of mine time. I needed to spend more time doing the other part of my job – issuing permits to use City property for events such as road races, walkathons, protests, concerts and film shoots. 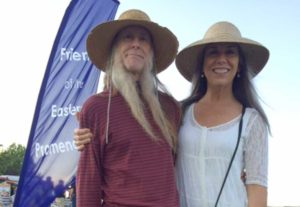 Ted and Executive Director of the Friends of the Eastern Promenade, Diane Davison at a concert last summer.

Is there any chance the Sunset Folk Concerts will come back?

TM:  The City and WPNA certainly hope that a group could continue the series like the Friends of Eastern Promenade have done. The Friends will run the Concerts at Fort Allan from start to finish in 2017.

Ted is more than willing to discuss what it takes to relaunch the Sunset series. He can be reached at tvm@portlandmaine.gov.