Ben Waxman left a career in Washington politics to come home to Maine. As the adviser to the president of the AFL-CIO, Waxman followed Obama’s 2008 Ohio campaign. He visited boom and bust factory towns and decided to do something differently. 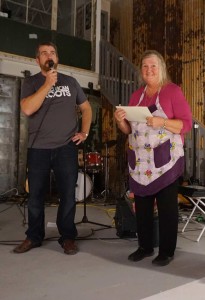 Ben Waxman and Dory Waxman at a recent press event for American Roots.

American Roots is a manufacturing company that makes fleece clothing from pullovers to blankets. They’ve set up shop on Danforth Street next to their sister company, Old Port Wool and Textile. Old Port Wool is owned by Ben’s mother Dory Waxman, who has been working in wool since 1992.

Ben formed a partnership with Polartec out of Lawrence, Massachusetts and hasn’t looked back. Although, Ben laid out the business model for American Roots, he says it is fiancé and co-owner Whitney Reynolds who is really the driving force behind operations. Whitney is overseeing three fronts for the company: production, finance and social media. Dory too is teaming up to get this company going, assisting in production standards, industry counsel and running ongoing training.

But what sets apart this company isn’t only their product. American Roots is doing labor differently. To find, train and maintain a workforce, American Roots worked closely with Old Port Wool and a network of Maine-based organizations focused on doing business better. Costal Enterprises, Goodwill Industries and Portland Jobs Alliance led the charge. These groups helped to create training programs, place workers and obtain a loan.

Portland resources were called on again when Portland Adult Education created a summer program to teach workers English and math. Women from Iraq, Peru and the Republic of Congo participated in the program this past summer. Ben has encouraged his workers to register with a union and has plans to raise his wages to $15 per hour.

Business hasn’t always been booming. Dory Waxman owned Casco Bay Wool Works in ’92, but was forced to close when the woolen mills in Maine began closing.

Dory stayed true to her principle of buying materials locally. It wasn’t until 2013 that she could restart her business as Old Port Wool and Textile. It’s clear that the Waxman family stays true to their values, and Ben is continuing this tradition.

Ben wanted to create jobs here in his hometown and his efforts are being well met. The American Roots Facebook page shows only positive reviews and encouragement.

An Indiegogo campaign has been set up to help this local business. The webpage shows a goal of $75,000 by the first week of December. American Roots encourages people to spread the word even if they cannot make a donation.

Learn more about American Roots, their business and their story at their website: americanrootswear.com. Donations to support this business can be made thorugh their Indiegogo campaign.