Is Chipman a Shoo-in for Senate District 27 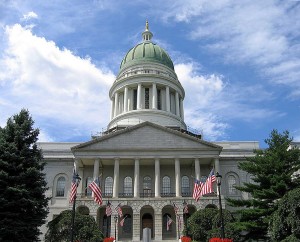 State Senate District 27 is one of two Senate seats for Portland. The district includes the entire Portland peninsula, the islands, and a large area off peninsula including the Back Cove, Woodfords Corner and East Deering neighborhoods. Senator Justin Alfond reached his term limit leaving the seat open.

Representative Ben Chipman currently represents Parkside – Bayside in the State House. He wants to step up to the senate chambers. He comes off an intense primary campaign where he defeated Representative Diane Russell and newcomer Chuck Radis. Recent history suggests that the winner of the Democratic primary in Senate District 27 is a shoo-in for victory in November. But challengers Green Independent Seth Baker and Republican Adam Pontius think it is important to offer a choice on the general election ballot.

Both Ben Chipman and Adam Pontius say drug addiction is their top priority. Seth Baker said the housing crisis was the issue that most concerns him.

Ben wants to work for greater access to treatment and expansion of education. He says it goes hand-in-hand with his other priority, health care access. He wants to fight to expand Medicare coverage.

If the votes are not there to expand coverage in the future, Ben says he will fight to get waivers for some type of limited expansion. An example may be  covering drug addiction treatment.

Adam believes the state needs to take a more holistic approach to the crisis.

“For too long the conversation has been dominated by treatment versus law enforcement,” says Adam.

He discusses his father’s experience as a psychiatrist and the approach of coordinated care. The goal is better communication between doctors, case workers and law enforcement.

Seth Baker says the greatest challenge is the housing crisis, especially for Portland. His solutions include encouraging rent stabilization, which he admits probably has to be done at local level.
Also Seth supports raising the minimum wage. He thinks that is the best way to help people afford housing. He argues Maine is ready for a $15 per hour minimum wage.

“I fundamentally believe that if you are willing to work full-time that you should be able to put a roof over your head and feed your family.”

Ben Chipman says his greatest challenge if elected would be working with an uncooperative governor.

“The fact that the Governor is still going to be there for two more years, that is a challenge for all of us. Democrats and Republicans in the House and the Senate, we are all faced with the challenge of Govorner Lepage vetoing every bill that comes to his desk and vetoing budgets. And not being willing to work with the Legislature as a team player.”

Portland’s legislative delegation will be losing a lot of experience. Both current State Senators are leaving office. Ben believes, “[Portland’s] Senators really need to have experience, need to know what they are doing.”

Green Independent Seth Baker admits being a Green might be his big challenge.

“Obviously being outside the two-party system is difficult, but on the plus side I want to be a bully pulpit for the working class and what is right. I’m sure it would be difficult to be the only Green Independent there, but at the same time I think it would free me up to actually focus on the issues and be connected to the constituency here in Portland.”

Republican Adam Pontius says, “I certainly don’t have the experience that Ben has, but I’m not necessarily green going into that process either.”

Adam is a political consultant. He has worked for gubernatorial candidate Elliot Cutler and for the Ranked Choice voting referendum. He believes he has the experience to overcome the challenge of bipartisan committee work.

Adam knows it will be an uphill battle to get elected for Senate District 27 as a Republican. But he says, “I am running so that those voters who are more pragmatically minded and business-minded have a candidate that they feel they can safely vote for.”