The Movies return to Exchange Street, hopefully bucking a sad trend in our city. 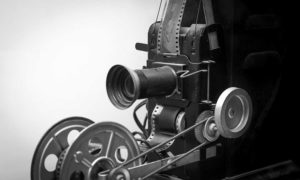 Perhaps you missed this humble column last month. I simply didn’t have the heart to write. In late April, my fantastic feline companion Mia Pharaoh lost her battle with cancer, and I’ve been in the dumps, rather than “The Dumpster. “

My few blocks downtown seem to have changed greatly these last several weeks. Since the Joe’s building was demolished, and the constant construction in its wake, and then Paul’s Food Center closing as well, I’m unusually empty-handed from lackluster errands. Then I return to a similarly empty apartment. Cue sad trombone!

When people speak of a city having a soul, perhaps its breadbasket contributes to that, and we now have a vacuum. And a house becomes a home with a sweet dog or cat, and I miss my friend.

But our city motto is “Resurgam,” and I will rise again. The phoenix! And once more, I do have hopeful news to report on a reinvention.

As a local movie lover, I’ve been involved behind the scenes with an ambitious film project team. A beloved, shuttered art house cinema is being rekindled in another form.

Nestled in the Old Port, a sanctuary for cinephiles, The Movies on Exchange gave me hope in 1994 when I considered moving back from a young adult life in San Francisco. My home town had an awesome video store (Videoport), a great downtown movie complex (The Nick), and an art-house cinema (The Movies). I met many like-minded film fans over the years at these fine institutions.

The Exchange Street theater closed years ago, and its great fare shifted to The Movies at the Museum. The 10 Exchange Street space itself is now changed but still familiar. The cinema seats are gone, replaced by folding chairs, and there is a new, snazzy projection booth (its construction funded through a SPACE Gallery Kindling Fund grant).

This physical incarnation will likely be called Low Motion, and its fare will soon begin with a monthly series.

I’m involved in the monthly screenings part – this is really cool! This volunteer board is a film studies nonprofit, and we’re selecting films from Juris Ubans‘ private 16mm collection. Juris is a West End icon himself, an esteemed film expert, academic, and enthusiast. (He’s done so much in his life it’s hard to write just one sentence describing his work.)

The movies from his collection will be projected via actual 16mm film – not digital. All the nostalgic, old school sounds of film projection, its quirks and ambiance… aaaaah. Something that Portland has been missing for a while. 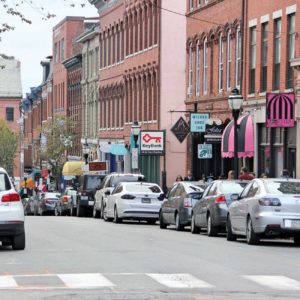 The movies return soon. First Friday, June 3rd, was our target for the initial screening at this Exchange Street space. However, planning and engineering a screening is an involved affair, and we may not be ready by print date. What is to come: a monthly political theme – echoing the presidential election year.

We’re hoping for good turnouts, encouraging interest in volunteering, and supporting the space. The nominal ticket price goes towards licensing fees (yet another interesting aspect of this project, navigating the realms of physical film ownership and screening rights).

The old chestnut, it takes a village, is absolutely true. As we lose some beloved places, we can still invest in preserving and reinventing other ones.

This project especially gives me hope because it bridges generations – we have Millennials, GenXers, and Boomers all volunteering their time to bring the film projection experience back to Portland. It would be great to see a range of ages in our audiences, too.

Right now, the scope is just monthly, but with a successful 16mm series run, maybe a film phoenix will rise again. Whether this First Friday, or in the months to come, the movies return soon and I hope you might seek out this unique experience. We will rise again!