It’s that time of year again, when our New England psyches shift. The nocturnal gains power as the nights grow longer. Halloween is revered here. Film audiences seek out scares, and Maine has a unique showcase for such dark fare.

Perhaps you have noticed movie posters near the State Theatre the last two weeks, for something called Damnationland. Forgive the cuss word, sensitive readers. Damnationland, as a brand, is a riff on Vacationland, “The way life should bleed.” It is an annual showcase of dark-themed short films made by Mainers. In its sixth year, these horror, thriller, and sci-fi shorts premiere in October at the State Theatre, then make their way statewide for Halloween-time. 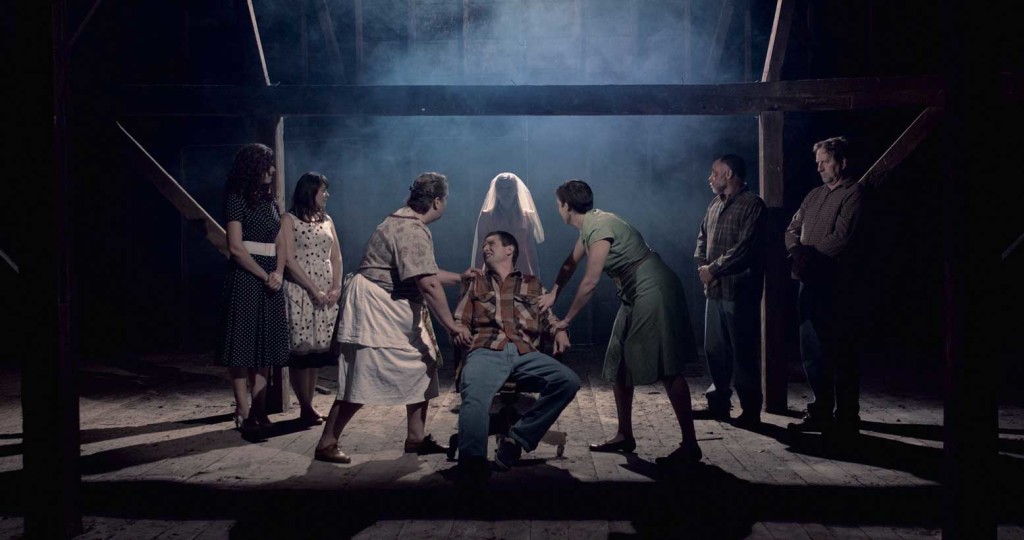 What’s the West End spin on this Maine film bonanza? Dozens of West Enders crafted this year’s showcase. I’ve lived in big, fantastic cities, and yet our little neighborhood has a staggering talent pool for its size. Writer-producer-director, polymaths, geniuses, the West End has them.

Damnationland as a concept was born in a West End bar several years ago. There are now so many West Enders involved, I may forget someone: Allen, Eddy, Charlotte, Jeff, David, Alex, George, Andrea, Tadin, dozens more. To top it off, the Damnationland production team meets up on Brackett Street.

Film is a demanding, and rewarding, passion, and our local filmmakers are passionate people. They have jobs, and make their own movies on nights and weekends.

Every year, as the film world changes with interconnectivity, technology, and awareness, Damnationland changes, too. This year it is bigger in scope, includes more titles, and boasts its first soundtrack. Ambitious is an understatement, everyone brought their A-game and delivered.

As a showcase and team, we want to encourage women’s voices in a lopsidedly male film field. We had a record number of women directing, writing, producing, and starring this year. It’s really important for young women to see us in these dynamic leadership roles.

As a child, 40 years ago, I never even dreamed of becoming a film director, as I didn’t know any. As a director and producer now, it’s rewarding to feel the pride in the room when our names come up on the marquee.

As a team, our scrappy collective of talented Mainers, we made the event happen. Those films were born, and now they have lives of their own. Damnationland allows the individual films to find distribution or a festival life.

If you are reading this in a Portland cafe, take a look around. The barista probably made an award-winning film, or music composition. The person sitting near you wrote a book, or a fantastically insightful blog. Fine artists, musicians, dancers, cinematographers, costumers, choreographers, prop maker… they are all moving through your social circles.

We are fortunate to have local institutions and businesses that support our visions. A big thanks to the local venues that let us rehearse, prep, shoot, produce, screen, or sell. Several hundred people came to our October 16th premiere at the State – wow, what an audience!

Over the next several months, if you spy a crowd-funding campaign for a local film, consider helping them. Your contribution may be all they need to reach the next level.

A film scene is nothing without its audience. Next fall, please keep an eye out for another spooky poster, and come see us, if you dare. Be part of the zeitgeist!

You can find our soundtrack or DVD at Bull Moose. Thanks also to West End News for this coverage.