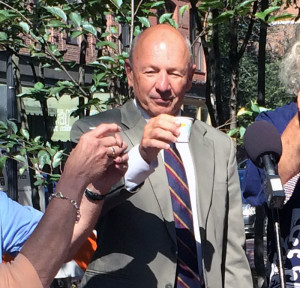 Mayor Brennan highlighted plans to convene a task force to examine how the city can be wired for fiber optic broadband. The task force will have no power to implement an initiative, but can study the costs and challenges involved.

The Mayor wants to change zoning to promote affordable housing. He also called on the City to identify City owned lots for affordable housing development. West Enders anxiously await to see if the Reiche teacher’s lot (next to Fresh Approach Market on Brackett Street) is on the list of property to be sold.

The Mayor promoted a $50,000 grant from the Maine Technology Institute that his Growing Portland initiative received, and the City will use to create a health informatics cluster in the region. The goals is to support the creation of new, good paying jobs.

The Mayor called on the City to target Forest Avenue, from in-town to Woodford’s Corner and Morrill’s Corner, as the next area for planned growth. The Mayor mentioned using historic preservation designations and updating zoning as tools to spur development.

Finally, the Mayor plans to introduce a new City budgeting process in the next two months with the goal of increasing transparency and informing the public.

Meanwhile, the city awaits the conclusion of the Mayor’s task force on code and fire safety, and the passage and implementation of the new citywide minimum wage–an initiative that the Mayor formed a task force to discuss after his 2014 State of the City address, but has yet to come before the rest of the City Council.