This fall a West End organization, Side x Side, in partnership with the University of Southern Maine and Youth in Action, a West End nonprofit, accomplished something that has never been done in Maine before. They won the prestigious and very competitive Education Model Development and Dissemination grant from the U.S. Department of Education. The grant is for $1.9 million, and will fund Side x Side as they pilot a 4-year program to integrate arts education into core curriculum studies at local elementary schools. 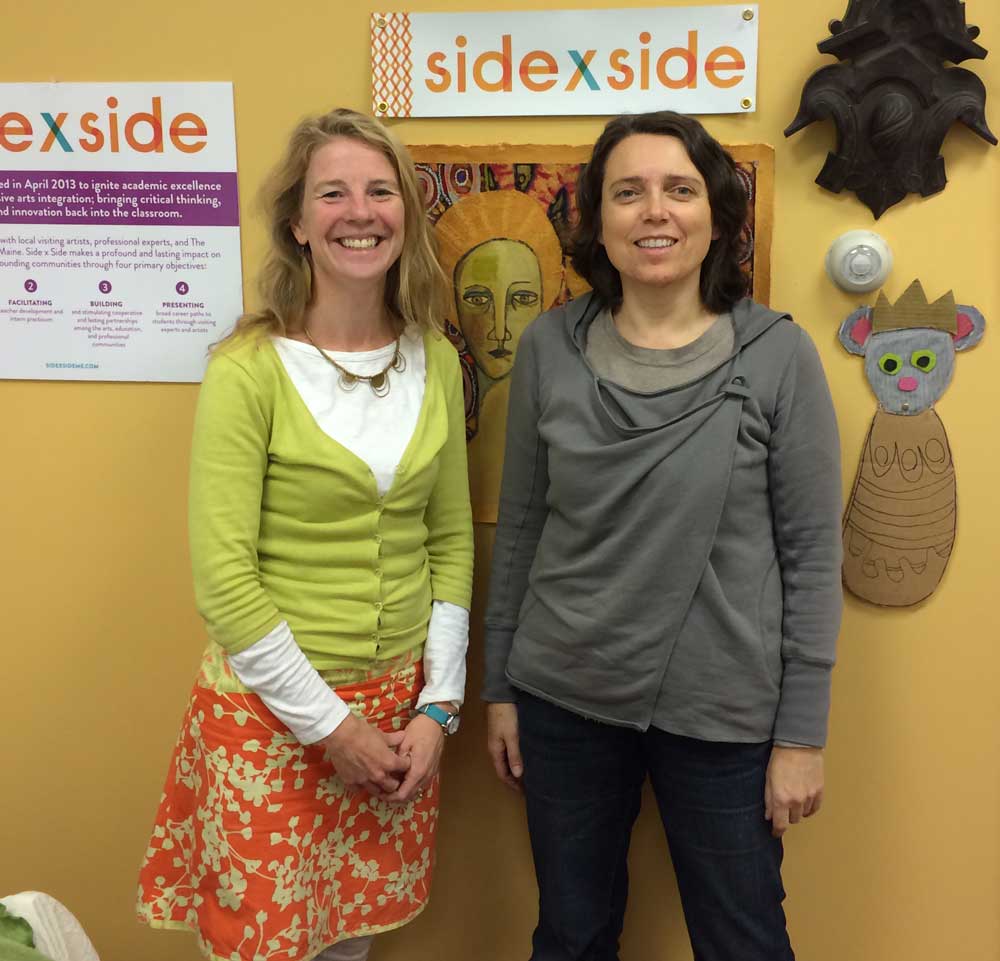 Beth Wilbur Van Mierlo and Annette Kraus will use $1.9 million from the Department of Education to expand an arts integration program they piloted at Reiche to four elementary schools in Portland.

Local artist Beth Wilbur Van Mierlo, of Oak Street Studios, and Reiche volunteer parent Annette Kraus, won the grant based on a pilot project at Reiche Community School. Van Mierlo and Kraus are both parents of Reiche students, who spent a lot of time volunteering in the classroom. Last year, they worked with faculty at Reiche to formalize their efforts, and created a multidisciplinary in-classroom program for students. The pilot program was called “Moving Oceans,” and they used writing, art, and sculpture to help kids express their learning about oceans and marine life in new and exciting ways.

The grant will help Van Mierlo and Kraus expand the program next year to include all grades, K – 5, at Reiche. The program will expand each year to eventually include four elementary schools, including Reiche, East End, Ocean Avenue, and Riverton schools. The schools will still teach the same required standards, of course. But the goal is to integrate arts into the core subjects. The program and its educational results will be evaluated and studied along the way.

“The hope is that at the end of the four-year period, we’ll have not only information on impact, but a real platform from which to distribute these programs more widely, in Portland and beyond,” said Annette Kraus, Side x Side cofounder.

The “Moving Oceans” program lasted for 10 weeks, and involved students in and teachers of the second grade. The programs included workshops with a local author and marine biologist. The students really enjoyed meeting the visiting expert.

Each student also got to choose a local marine creature to study in depth. They completed a line drawing facilitated by a local artist. They studied the create and wrote facts about their creature on the back of the drawing. They used books, Ipads, field trips to islands in Casco Bay and tidal pools. They spent the ten weeks thinking about what the creature looks like, writing about its habitat and eating habits. Putting this knowledge together with drawings helped formed connections in the student’s minds.

“They got to move around, they got to ask a lot of questions, they got to be very creative. They were all incredibly engaged. By the end of this project, they all wanted to be marine biologists!” said Van Mierlo, Side x Side cofounder.

At the end of the program, kids built their creatures in 3D. The sculptures were displayed to parents and the community at a showcase.

“They were really getting a well-rounded sense of what their creatures were and what the ocean is, and what it means to live in Portland.”

But are all kids able to learn this way, expressing themselves through art?

“There are no kids that aren’t artistic. They might think that…” said Kraus.

Van Mierlo echoed that this is what the program is all about. “Everybody can do this. We’re going to show you how…. So every kid was successful, and that was the cool thing.”

“The teachers really enjoyed it, also. They were thrilled to engage in a different way of instruction,” said Van Mierlo. The grant incorporates professional development and training for the teachers, so that teachers can continue this type of work for years to come. This is part of USM’s role. USM will also be in charge of bringing interns into the program.

“It was fun watching our students relax and explore with drawing, sculpting, and painting,” noted Reiche teacher Kristen Fox. “Producing this art work encouraged the students to take a closer look at their creature, and the learning was deepened throughout the creative process.”

Parents have chipped in, too. This was important to Van Mierlo and Kraus, as parents themselves, who started this journey as volunteers. Parents helped by photographing the program, developing the website, and raising funds to help make the program a success.

This project was rewarding for the organizers, as well. “Students that may first be introduced to a creative way of learning, may hesitate– To see that turn around, to see that pride, and see the success they have. It’s phenomenal,” said Van Mierlo.

“The two of us have built this, and it’s really starting to take off, and we did not take “no” from anyone along the way,” said Kraus. “Anyone whom you would have asked, would have said, ‘It’s not possible.’ We turned it around, and found another way.”