Halloween Parade Back On

The West End NEWS reported on September 30th that the Annual West End Halloween Parade would be cancelled. At the West End Neighborhood Association meeting on October 8th, it was announced that West End resident Wynne Wirth was willing to take the lead and save the parade. Wirth and City Councilor David Marshall met with police representatives and City staff on Wednesday, October 15th, and made it official — the Halloween Parade will happen on Halloween evening, October 31st.

Nancy Parker from the Shoestring Theater, who had run the parade for over 30 years, had announced that they would not organize it again this year. As the parade grew to include hundreds of participants from all over the city and beyond, Shoestring Theater found it difficult to find volunteers and raise money that was needed to pay the required police officers and permitting fees. Shoestring Theater had asked others to take the event over, but there were no takers… until now.

Wynne Wirth snapped into action, got the blessing of Shoestring Theater to take over organizing the parade, and started working with the City to meet all requirements. Wirth submitted an application with the City, and has announced that the parade is a go.

The parade will have a shorter route than in years past, with a few pauses, to help keep it cohesive and easier to manage and keep safe. The parade will gather at 5:30 p.m., and prepare to start marching at 6:15 p.m. Gathering is tentatively scheduled to take place on the Reiche School Playground. 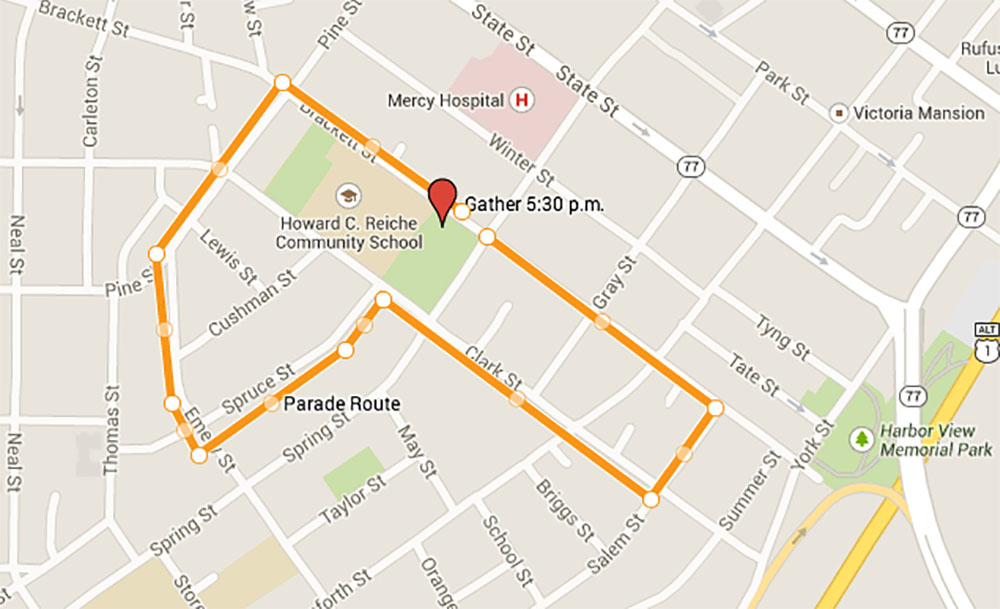 From the playground, the route heads up Brackett Street to Pine Street, then to Emery Street, and turns onto Spruce Street. There will be a pause on Spruce, and then the parade will proceed all the way down Clark Street to Salem Street, where it will pause again. The route turns left on Salem back to Brackett Street, and up the hill back to the Reiche playground.

The event requires 15-20 volunteers stationed at all street intersections to keep the marching path safe and free of cars. The two short pauses are designed to give trailing paraders a chance to reunite and continue to march as one distinct group.

Wirth is organizing musicians and visual art performers, and is seeking ideas in general to make this parade the most fun possible.

“A huge thanks to those who have provided funds to cover the expenses! Especially Youth in Action, who had funded this event for many years now, and Learning Works, and (City Councilor) David Marshall, for financial support as well as much help in the city process, not to mention his volunteering and artistic inputs. The Watson family and to all those already jumping in with volunteer contributions. But most of all, to the artists who created this unbelievable tradition, that sets apart our neighborhood Halloween from every other!” noted Wirth.

Organizers still need 15 to 20 volunteers to be crossing guards to block intersections, and at least $640 to cover permitting fees and to pay for two police officers to lead and trail the parade.

If you would like to volunteer or donate to help make the Halloween Parade happen, please contact Wynne Wirth, wynneway@yahoo.com.