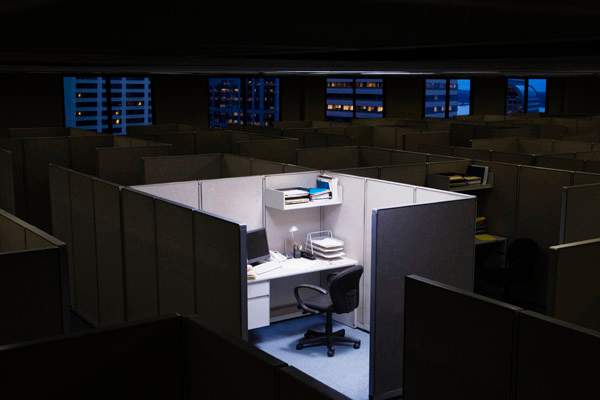 I recently completed a temporary job stint at Purdy Powers & Company, an accounting firm on Middle Street. I was hired as a front-desk administrative assistant. The job was supposed to be a month-long temp assignment. But after four days, the temp agency informed me the job was effectively over. I was never given any rationale for my being terminated other than the standard business parlance of my “not being the right fit.”

Even though I was not technically “laid off,” given that it was just a temp job, it is nonetheless hard not to feel as though that is exactly what happened. And even if this had been a permanent, full-time job, Maine’s status as an “at-will” work state means employers can basically terminate any employee at any time, for any reason.

Welcome to the future of work: Temporary, part-time, or contractual in nature and devoid of benefits, job security or union representation. The majority of these jobs are in retail or the health and service sectors, often with erratic schedules that fluctuate wildly from day to day. And virtually none of these positions pay a living wage.

Indeed, five years after Wall Street trashed the global economy, ushering in the worst economic crisis since the Great Depression, companies are still reluctant to hire anyone. Rather than using the money from President Barack Obama’s economic stimulus for investment and hiring as it was intended, American businesses are simply hoarding the cash. As a result, Wall Street is enjoying record profits, while the true unemployment rate–the  so-called “U-6” measure which tracks those that have given up looking for work entirely–is around 10.5 percent.

Throughout my four days at Purdy Powers, I received no training of any kind. In fact, on my last day I was left to cover the front desk alone. (The one full-time receptionist, who typically assisted me, was out that day.)

This lack of training is another growing trend among employers. Whether it is due to a lack of time and resources, or simply an unwillingness to invest the effort, fewer employers are taking the time to train new hires. Instead, they seek out job applicants who have previously done similar–if not identical–work and thus require no formal training.

According to Wharton School professor and Center for Human Resources director, Peter Cappelli, in a 2011 op-ed for the Wall Street Journal, “[T]he amount of training that the average new hire gets in the first year or so could be measured in hours and counted on the fingers of one hand.” As a result, Cappelli writes, employers are “demanding more of job candidates than ever before.”

“They want prospective workers to be able to fill a role right away, without any training or ramp-up time,” he writes.

Cappelli’s op-ed served as the basis for his 2012 book, Why Good People Can’t Get Jobs, in which he systematically debunks the bogus concept of the alleged, “skills-gap,” which suggests there is a “mismatch” between the skills workers currently possess and those employers are looking for.

Cappelli instead points to far more concrete reasons why companies cannot find the “right people” for the job: Insultingly low starting salaries; an over-reliance on ultra-sensitive resume-scanning computer programs that weed out even the most qualified candidates; and, again, the lack of on-the-job training.

According to Cappelli, employers are “looking for a unicorn.” And the high level of unemployment in the wake of the Great Recession allows them to be as picky as they like.

Yet, while Cappelli’s blunt criticism of the business community is a welcome reprieve from the disingenuous “blame-the-victim” rhetoric we typically get from the corporate media, his analysis is ultimately reformist–not radical. Cappelli, like fellow liberal economists, Paul Krugman and Joseph Stigliz, routinely, and often eloquently, deride the excesses or the foibles of capitalism. But they will never indict the system itself. They are certainly not calling for the working class–whose very labor creates all of society’s wealth–to seize the means of production for themselves.

To paraphrase Karl Marx, the economists of our time have “merely interpreted the world. The goal, however, is to change it.”

So, what would such a change look like? Well, we could start by bringing some democracy to our jobs. As I have previously noted in this column, there is nothing remotely democratic about the modern day capitalist workplace. It is, at best, a benevolent dictatorship.

Lest readers think I am being over dramatic, consider:

Workers have no say in their wages, in the nature of the work they do, the hours they work, or the general conditions under which they labor. No wonder Marxist economist Richard Wolff, in his book, Democracy at Work: A Cure for Capitalism, calls the capitalist workplace, “one of the most profoundly undemocratic institutions on the face of the Earth.”

Wolff points to worker’s self-directed enterprises, wherein employees not only own and operate the business they work in, but also serve as the board of directors and thus, determine how their surplus labor is used, as one way to bring some democracy to the workplace. (Worker-owned cooperatives like Local Sprouts and Jet Video perhaps point the way toward such a concept.)

In Franz Kafka‘s classic novella, The Metamorphosis, protagonist Gregor Samsa, a traveling salesman, awakes one morning to find himself transformed “into a monstrous vermin.” Yet, in keeping with Kafka’s dark satirical style, Gregor’s more immediate concern is that he is going to be late for work.

Kafka’s deliberately ambiguous story taps into the profoundly dehumanizing effects of modern capitalism. Gregor “was a tool of the boss,” Kafka writes, “without brains or backbone.”

Gregor’s transformation ultimately costs him his job, alienates him from his family, and makes him a stranger in his own home. He becomes, like all of us who struggle with unemployment, underemployment or dead-end, low-paying jobs, a quintessentially alienated person.