For about a year now, I’ve followed Bayside resident, Jay York, on Facebook. The local activist has a photo series that he calls “Jay’s Morning Walk,” to which he posts a daily entry. Occasionally there will be a photo of him skiing, or on vacation somewhere, but almost always it’s a photo of something that he sees while walking his dog Tucker around his neighborhood.

Bayside is well known for things like poverty and homelessness. Addiction, crime, and lines outside the soup kitchen have become the exterior images that those of us who merely pass through take with us, but York is someone who is trying to remind people that there’s a lot more to the neglected neighborhood than meets the eye.

York is an artist who lives and works on Wilmot Street with his girlfriend and her daughter in a converted old church. The house itself, dubbed “The Last Church on the Left”, in which York also holds really cool live concerts featuring bands from all over, is a testament (no pun intended) to the potential that Bayside holds. From a dilapidated old church to a unique, welcoming, multi-functional home in the heart (or underbelly, perhaps?) of the city- York’s house and the energy that he brings to a neighborhood that is sorely lacking in spirit (but not backbone) should serve as inspiration to all Portlanders that Bayside still has a chance. 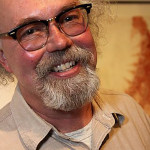 That is to say that with all the big money development prospects leading to accelerated gentrification and the hardscrabble day to day existence that so many in the neighborhood (both homeless and sheltered) are struggling with, there’s still hope that Bayside can become a thriving place for working class people- we just need more outspoken folks like York to step up and make some noise.

Here’s what York had to say:

Chris Shorr– How long have you lived in Portland/Bayside?
Jay York– Thirty-seven years in Portland and twenty-three in Bayside.
CS– How long have you been doing the “Morning Walk” photos?
JY– 1,600 consecutive days. Missed or posted late for a couple because of being sick.
CS– What gave you the idea?
JY– Needed to get back to photographing for myself every day.
CS– How has the theme of the photos developed and changed over time?
JY– It hasn’t. I photograph what I see on my daily walks. Maybe I’ve gotten better…walking, seeing, and photographing.
CS– Is there a message that you’re trying to get across?
JY– Pay attention.
CS– How would you describe the sense of community in Bayside?
JY– Fragmented. I don’t think there is a generally held sense of community in Bayside. I live in a neighborhood that most people just pass through…whether to get services, get to work, or buy food.
CS– In your opinion, what are some of the underlying problems plaguing the neighborhood?
JY– City leadership has always been the underlying problem for Bayside. Our city councilors know very well that they are sacrificing the quality of life of Bayside residents by clustering all the social services and shelters here. They know that by providing “low barrier” services the Bayside neighborhood has become the destination for people in need from all over the country. Unfortunately, with them, come those who prey on them…drug dealers.
CS– Do you think the city is handling the problems in Bayside properly?
JY– As long as the issues in Bayside are hidden and quiet the city will do little to change it. Why do you think Oxford Street is one way in two different directions through Bayside making it difficult to use by car? So that people passing through don’t see the extent of what those of us who live here see every day.
CS– What else do you think could/should be done for Bayside to improve the neighborhood for people who live there?
JY– First and foremost our mayor and city councilors need to publicly acknowledge the crime and quality of life issues in Bayside, and take responsibility for helping create and perpetuate them.
—
by Chris Shorr, WEN Staff Writer