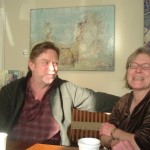 Susan Reilly, 64, was killed in a three vehicle collision on the Massachusetts Turnpike in Charlton, Massachusetts on December 23rd. Mrs. Reilly and her husband Tony, who was seriously injured in the accident, were the founders of the American Irish Repertory Ensemble in Portland.

AIRE, which celebrated its 10th anniversary this year, had just completed a production of  “A Celtic Christmas” at the Portland Stage Company.