Your local newspaper is your passport to your own neighborhood

Local Newspaper readers are more likely to be involved in community and to buy local. 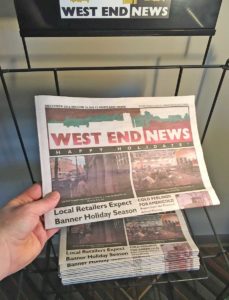 As the winter chill sets in, it is tempting to stay inside and isolate yourself from the world. And you can be forgiven for doing that when it’s below zero and Netflix exists. But the news keeps happening whether you’re outdoors or safe beside your woodstove. And if you’re reading West End News, you’re paying closer attention to local news than most. A 2016 report by the Pew Research Center found a strong correlation between civic involvement and readership of local newspapers.

That alone might not seem surprising. People who care about their local zoning board election do, after all, seem more likely to care about people and issues near them. But Pew found that this correlation plays out in some interesting ways. People who read and value local news coverage are more likely to feel attached to their community generally. They are also more likely to vote in local elections. And readers of local news are most likely to know all of their neighbors.

Pew’s findings are consistent with the survey of West End News’ own readers, as published in this month’s edition. As WEN Publisher & Editor Anthony Zeli notes, when asked why they read this paper, its readers frequently cite its focus on local and community news and its coverage of their neighbors. And this makes sense. To paraphrase political campaign mastermind James Carville: It’s your neighborhood, stupid. There’s a place for global newspapers reporting on Washington and foreign affairs. But there’s also a place for the nearby paper taking you behind the scenes of programs at Congress Square Park, or exploring the new business model pioneered by a Portland fleece maker (to pick just two recent WEN stories).

WEN readers’ interest in all things local includes supporting their neighbors’ businesses too. In the recent survey, one hundred percent of readers reported buying from local companies. On one hand, it might seem hard not to support them. In the Portland area you can barely walk a block without passing great businesses from graphic designers to restaurants to bookstores. But you’re making a choice when you support those local companies. They appreciate it. As do their employees, and the other local companies that they buy from and sell to.

So here’s to another great year, Portland. Keep reinvesting in our community. It’s what we make it.

Adam is a business attorney at Opticliff Law, LLC in Portland and a board member of Portland Buy Local.