Developer CPB2 wants to rezone and build up 10 acres at 58 Fore Street, site of the Portland Company complex. 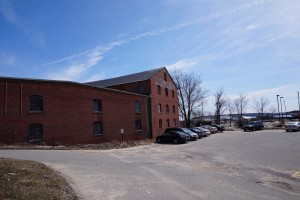 A citizen group, Soul of Portland, is fighting them. Their concerns are numerous, but the biggest point of contention at this stage of the process is building heights.

Soul of Portland believes they have the documents to prove that the City’s comprehensive plan requires building heights to be measured from two feet above flood plain.

City Staff and the developer claim that average grade should be used as the starting point for measuring heights.

The difference is substantial. The site sits on a steep grade running up Munjoy Hill from the waterfront. Where the measurements begin, whether from flood plain or average grade, could mean the difference between maintaining a view of the water and losing it.

At contention is “Illustration 33” from the Easter Waterfront Building Height Study. This document was edited at a 2004 Planning Board meeting, but according to City Staff it is unclear whether those edits were passed by either the Planning Board, or later by the City Council.

In the minutes from the November 2004 City Council meeting–when the Eastern Waterfront Master Plan was passed into the City’s comprehensive plan–city planning staff member Bill Needleman is quoted, “East of Montfort Street building elevations are tied to two feet above flood plain which is the build-able elevation. So there would be no chance of a developer grabbing a foothold on upper Fore Street and averaging grade and going up higher.”

At a City Council workshop in late March, Bill Needleman stated that City Council did not pass elevations from flood plain.