If you haven’t visited your West End parks in a while, this is a great time to walk around and see changes large and small that have happened since last spring. At Taylor Street, Clark Street and the Western Prom you’ll find more than new leaves. Meanwhile, at Harbor View there’s an opportunity on May 20th to get involved in the creation of an edible start-up. Come work with neighbors to plant the first grove of a “food forest” in the West End. 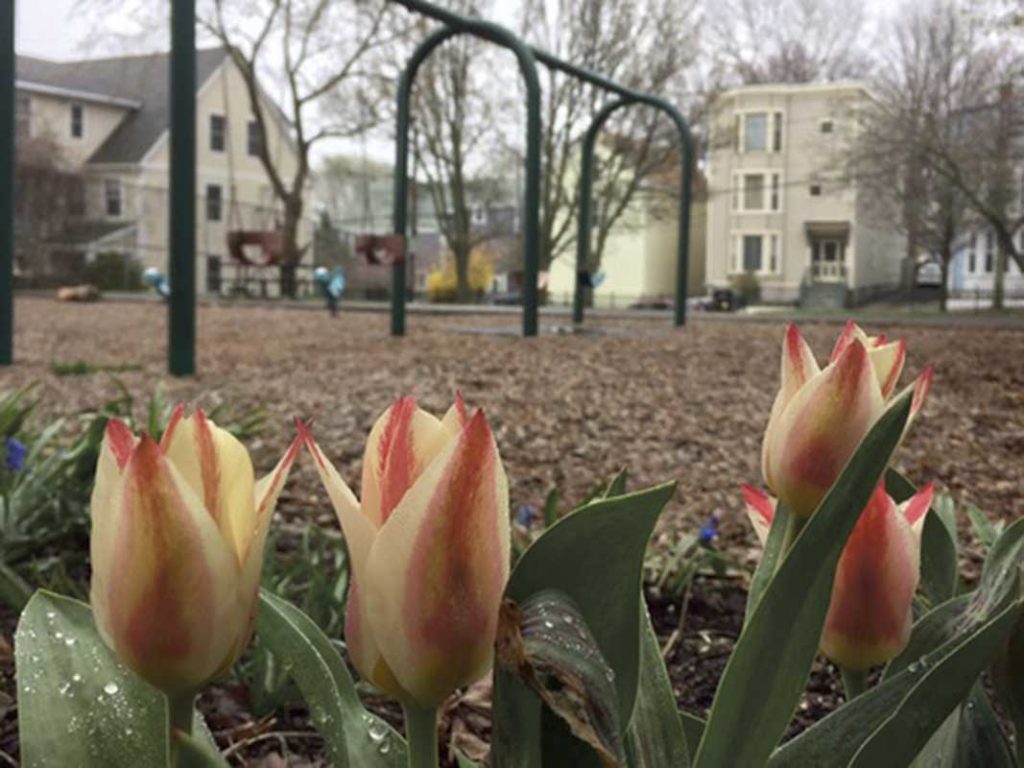 The pollinator garden is pushing up, promising a feast for the bees, butterflies and others that need the nectar and pollen the garden provides. Also notice that the Parks Department has cleared a swathe of scrub on the top edge of the hill leading down to Valley Street. This will improve the views from the path, looking out over the treetops below to the west and north. On a good day, visitors may see all the way to Mount Washington!

Neighbors continue to enjoy work done several years ago by the City. One modification that would be good for all city parks: fencing off the playground area to keep dogs that are illegally off-leash out of areas where kids play. The city also resurfaced the basketball court.

A neighbor across from the park said, “One of my favorite sounds of snow receding, spring arriving is the thumpity thump thump of kids and young adults playing ball.” 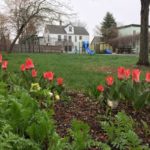 Crocuses, tulips, and hellebores planted by neighbors have already popped up, as have the preschoolers between rain showers. By the end of last summer, the bench and picnic table installed last year by the Parks Department were already getting lots of use by families, friends and lovers of peace and quiet in the open air.

In Clark Street Community Garden – near the park on the corner of Clark and Salem streets – Gwynne Williams and other West End Neighborhood Association members will be growing green beans to donate to the Locker Project at Reiche School.

Perhaps the biggest change is soon to come at Harbor View Park, on York Street running downhill to Commercial Street. This park, which for a long time has been mostly lawn and scrub, is about to become a home for groves of edible plants. It will be the West End’s own version of a “food forest.”

Thanks to the City and the West End Neighborhood Association, neighbors will be joining forces on Saturday the 20th of May, 10 a.m. to 4 p.m., to plant the first bed. The City will supply the plants, including young peach trees, cherries, mulberries, highbush blueberries, and other lesser known fruiting shrubs. Also, UNE will donate several disease-resistant American Chestnut trees to be planted elsewhere in the park.

The project will plant one or two beds every year, and will take several years to complete.

The goal of the project is to bring community members together to create a fruitful welcoming space for residents and visitors, a connection to the natural world, and an experience of positive action to improve the lives of people, plants, and animals. Please join us on May 20th! Whatever the weather, it’s a fine day to visit a park!

For more information, go to http://wenamaine.org/harborview.