WENA Board has new leaders ready to grow the neighborhood association

Change and continuity characterize the West End Neighborhood Association’s leadership and vision for 2017. We lost some WENA board members who finished their terms. But we gained new ones, some of whom had served before and some of whom are fresh arrivals. Enough seasoned board members have stayed to provide continuity. So, we begin the year eager to build on a foundation that has made WENA one of the most active neighborhood associations in Portland!

Thank you to leaving board members 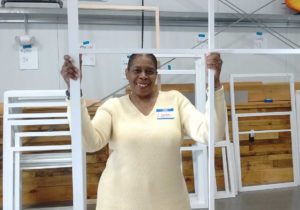 After two years as President, Ian Jacob was term-limited. But he has remained a board member to continue working on several matters begun during his presidency. Jennifer Defilipp gave many years of board service, particularly to neighborhood watch efforts, before finishing her term as Vice-President. We are thankful for Jen’s numerous contributions and her creative, congenial spirit.

Also rotating off were Wells Lyons, Chip Martin and Michel Michaud. As a former President, Chip contributed institutional memory and parliamentary expertise. Wells and Michel gave hours of wise counsel — literally, since their occupations as attorneys proved invaluable. In fact, they led a meticulous review of by-laws that hadn’t been revised in about a decade. Also, Wells provided knowledge on city processes, while Michel revitalized Reiche’s volunteer lending library, the Book Nook. We thank Wells, Chip and Michel for their dedication to the neighborhood.

Losing this amount of talent has been daunting. But, happily, other strong leaders have stepped up. Most notably, Leana Good-Simpson, under whose own presidency some years back WENA became an official non-profit organization, shifted from being Treasurer to Vice-President. Stepping into the post of Secretary is board member Pamela Shaw, who has been helping coordinate our nascent Aging in Place initiative. Retaining his responsibilities as website and media manager is Clifford Tremblay.

Also, former WENA board officers Rosanne Graef and Steven Scharf have returned for additional tours of service. Having been President prior to Ian Jacob, Rosanne is now Treasurer and lead coordinator of Swim for Life. This is our program to provide swim lessons to Reiche students. Steven, who was Secretary several years ago, will now focus on informing us all about city financial matters at WENA’s monthly meetings. We also gained newcomers Morgan Beede and Cassandra Graham. Their perspectives promise to increase our understanding of what it takes to make a good neighborhood even better.

Looking ahead and how to get involved

WENA board members want to do the best job we can of increasing the spirit of community in the West End. This year, we will add to longer-term activities some experiments with ways of better using the community room at Reiche and enhancing our already appealing portion of the peninsula.

You can learn more by consulting our website (www.wenamaine.org). Attend our meetings on the second Wednesday of each month in the Reiche community room from 6:30 to 8 p.m. Or consider sending us an email (hello@wenamaine.org). We welcome everyone’s ideas and energies.

Liz has been a WENA board member since 2013 and Secretary for the past two years. She is now WENA President.