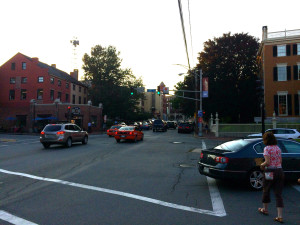 A workshop to provide the public with information on a recently launched study to evaluate the effects of re-introducing two-way traffic flow on State and High Streets will take place at the Merrill Auditorium Rehearsal Hall on Monday, September 8th, starting at 6 pm.

Members of the public who are interested in how the study will be conducted, the goals of the study and initial traffic findings within the study area are encouraged to attend. There will be ample opportunity for individuals to provide comments and ask questions.

A large proportion of the infrastructure within this area is in need of upgrading, so before making any financial investment, the City wants to assess what kind of changes could make the area more functional for all transportation modes; pedestrians, bicycles, transit and other vehicles.

The study will look at the potential effects of making State and High Streets two-way for vehicular traffic, adjusting turning patterns, adding bicycle and pedestrian infrastructure and other changes that could enhance the livability in this area.

The study will look at how these changes would affect mobility, parking and safety, as well as estimating approximate costs to make any proposed changes, including already needed upgrades.

More information on the study, including the members of the advisory committees and involved City staff can be found at http://www.portlandmaine.gov/1315/State-and-High-Street-Study or by calling or emailing Carol Morris, Study Public Outreach, at 207-329-6502 or cmorris@morriscomm.net.