A donated porcupine sculpture replaces a stolen one at the Jetport. 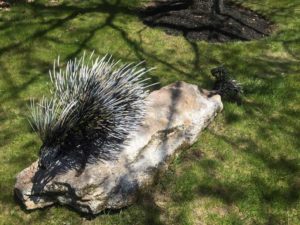 The Portland International Jetport announced that June LaCombe has made a generous donation to restore a popular sculpture piece on the Jetport’s access road. Ms. LaCombe has donated a porcupine sculpture by artist Wendy Klemperer to replace the original sculpture that was stolen last month.

“I have donated the porcupine that I own by Wendy Klemperer as a tribute to the original donation by William Hamill. I did not want his gift to so many visitors to be diminished by the theft,” said Ms. LaCombe.

“We are grateful for the generosity of June LaCombe in restoring an important part of an art exhibit that has become a popular welcome to the state of Maine,” said Paul Bradbury, Airport Director.

“We have been overwhelmed by the interest in the Porcupine, and its unfortunate theft,” he continued. 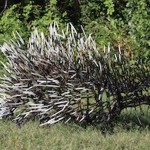 The sculpture that was stolen in late April.

The sculpture includes two porcupines, an adult and a baby. They are attached to a block of granite and have been installed near the original location.

The porcupine sculpture formed a part of a series of sculptures along the Jetport’s International Parkway entitled Glimpse, by Wendy Klemperer.  Glimpse also includes sculptures of a herd of deer and a wolf.  Glimpse was generously gifted to the City of Portland by William Hamill in 2011.