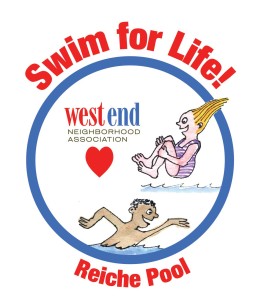 The West End is fortunate to be home to the the Hap Frank Pool, housed in Reiche Elementary. It is an asset that benefits the students and enriches the community. Reiche swimming lessons have been a part of the curriculum since the school opened its doors in 1974.

All five grades received swim lessons until 2000, when the School Department defunded the program due to financial constraints.

The West End Neighborhood Association (WENA) stepped forward to save this important program. For the past 16 years, WENA’s Swim for Life program has funded one grade to receive swimming lessons during the academic year. In the summer, WENA covers the $1 admission fee for children to use the Reiche pool and provides these young swimmers with a swim cap.

The City’s Recreation Department provides the swim instructors. Marie Davis, Assistant Director of Recreation, commends WENA for recognizing the importance of swimming as a good source of exercise, as well as an essential life-safety skill.

According to Davis, 60-70% of the students at Reiche do not know how to swim. The is an alarming statistic when considering that the school is on a peninsula The nearest ocean beach is little more than two miles away, and the state has literally thousands of lakes and ponds.

According to WENA President Ian Jacob, Swim for Life is the Association’s only endeavor, outside of operations, that seeks support from its members, area residents and businesses. WENA does some type of funding raising for Swim for Life every other year. Most important to Jacob is that all of the money raised for the Swim for Life program goes toward instructor salaries and bathing caps… and that’s it.

WENA likes to mix up how it raises funds for Swim for Life.  In 2008, the Association participated in the Old Port Festival to set a Guinness World record by making the largest lobster roll. This event was hugely successful despite not setting a record. The festival goers quickly bought pieces of the 69 foot lobster roll.

The “World’s Longest Lobster Roll” was 69-feet plus! -Photo by Steve Graef ’09

Other efforts have included silent auctions and receptions featuring guest speakers with an appreciation for swimming.

According to Ian, WENA will be raising funds for the Swim for Life program later this year. Their goal is to secure a minimum of $6,000. The Reiche kids win if WENA exceeds its goal because they to offer more swimming lessons during the academic year.

You don’t need to wait for this year’s appeal to support Swim for Life. Go to the WENA website, wenamaine.org, to learn more about the program and to make a tax-deductible donation.

WENA also gratefully accepts checks made out to WENA-Swim for Life, PO Box 7898, Portland, ME 04112.