Taking any sound and making it musical 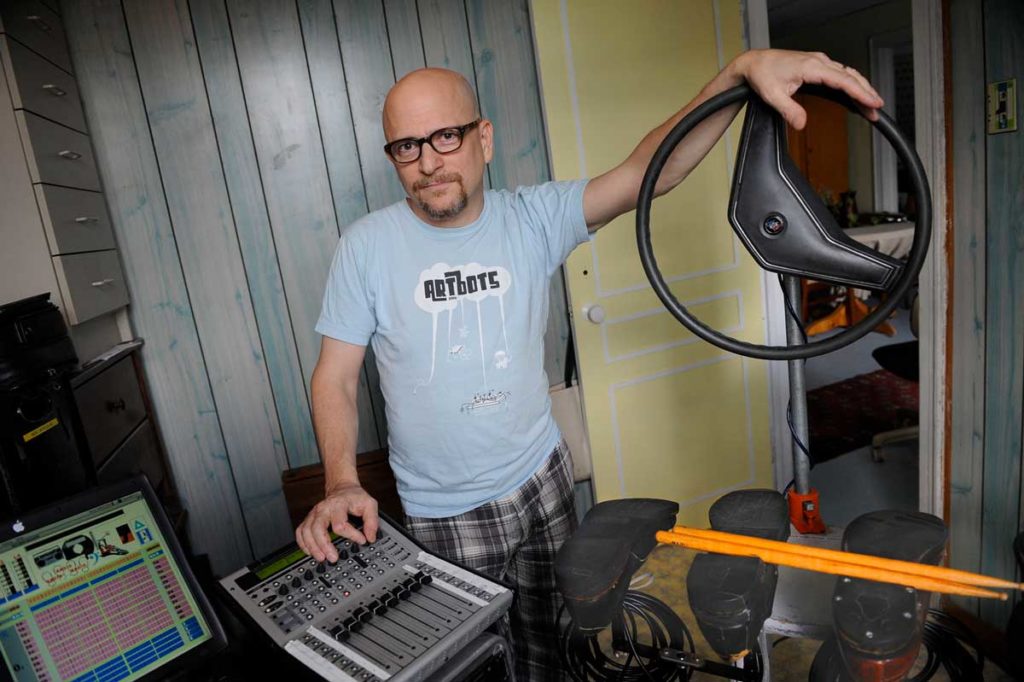 Joshua Fried, aka. Radio Wonderland will host the They Might Be Giants after-party at Genos, April 21. -Photo by Anonymous

From the NYC underground, Joshua Fried takes to the road for the first time as Radio Wonderland, and his stop in Portland is extra special. He is throwing an official afterparty for his friends, They Might Be Giants, at Geno’s Rock Club, Saturday, April 21.

How to explain Radio Wonderland? Unique. Quirky. High-concept. Performative. Joshua Fried’s latest project in a multi-decade career uses found sounds from the radio and turns them into danceable grooves. He does it live, and every show is an original. And if that wasn’t challenging enough, it seems rather obvious to Mr. Fried to use shoes and a Buick steering wheel to make music.

NOTES FROM THE UNDERGROUND

Joshua Fried was a punk at college. In love with the Sex Pistols and Patti Smith.

“It helped when I was first making music to be an extremist,” Joshua says. He describes a younger artist, who was “absurdly minimalist.”

“I needed that. It nourished me. But I felt that slipping from me.”

It was the 1980s and punk, disco, art, all mixed in the East Village. He was performing at the Pyramid Club and worked there as a sound tech. They Might Be Giants played there a lot, and their careers have crossed ever since.

Joshua describes their friendship as a “warmth of shared musical experience.” He collaborated prolifically with the Giants, especially John Flansburgh in the performance art group Watchface. He wrote the lyrics to “Lullabye To Nightmares.”

Joshua is excited about the Giants’ afterparty at Geno’s. Of course, he hopes every show is a party, “I feed off the audience. What I do is high-concept but still energizing on a visceral level.” 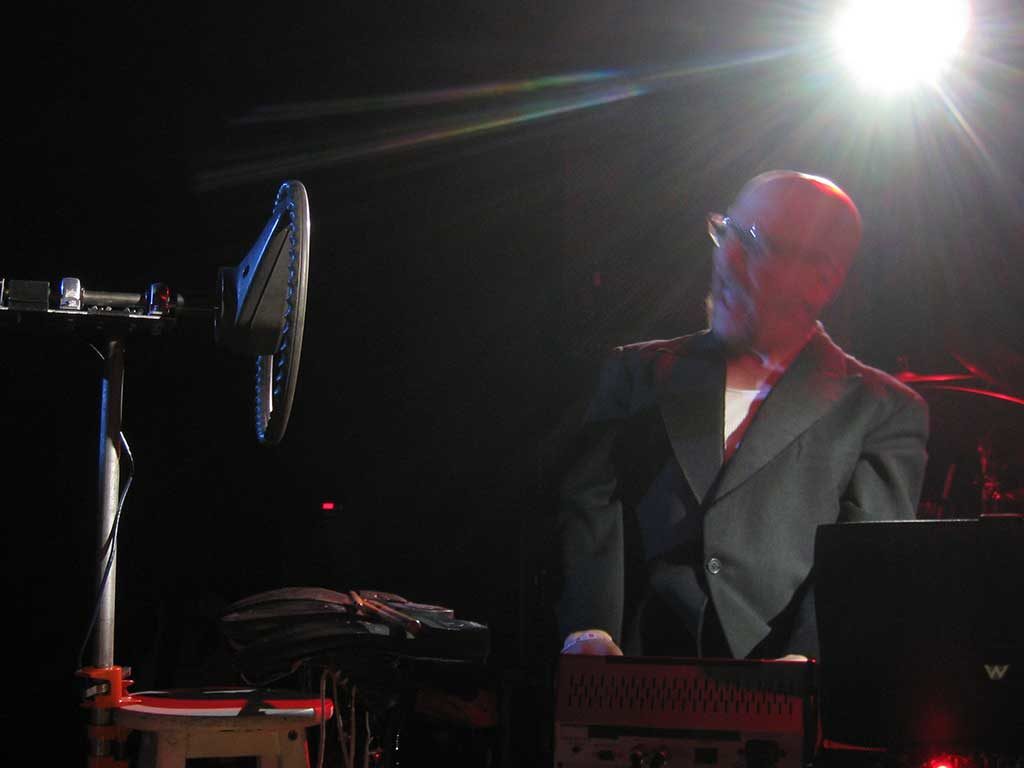 By My Name Is Blue Canary

“The goal is to take any sound and make obvious how musical it is.”

He starts his performance by turning on a radio. He captures a snippet of sound, maybe a bit from a commercial, and he manipulates it using a software he created.

With enthusiasm Joshua describes the process of creating the code that would power Radio Wonderland. He believes computer language can be elegant, even beautiful.

“It was so exciting to write the code, emotional,” he recalls. He had to teach himself a great deal, but it was important to him to craft the code himself. The rewards, he thinks, are well worth it.

From the code to the hardware, how does he interact with the captured sound? When you think electronic music, what gear do you picture? Keyboards, synthesizers, and drum pads, but this wasn’t right for Radio Wonderland. Perhaps, it’s too “high-tech looking” and “disconnected.”

“I absconded the digital tech look and went absurdist,” he says. But if not the typical, then what? It was so arbitrary. After all, he could use any objects.

In the end, the choice of shoes to drum on and a steering wheel for sliding melodies seems perfectly right. Joshua enlisted help in creating the hardware, and he is deeply grateful for the workmanship. The gear turned out great, and Joshua is amazed at what he can do with it. 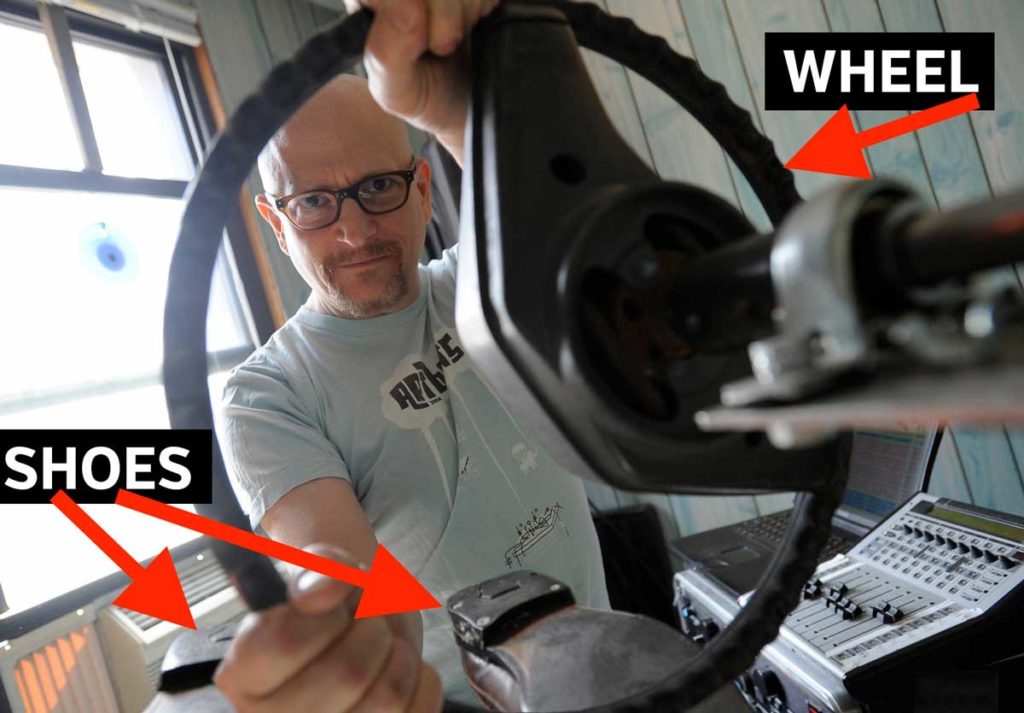 The shoes make for a flexible drum pad, and the wheel, in Joshua’s hands, becomes a true melodic instrument.

“I would describe it as a cross between a string instrument – something with frets – and a sampler, only easier to play in tune,” he says. “I’m getting better at playing the wheel, even practicing scales.”

Time to take it live. Turn on the radio. Hope for good reception. Record a sound and spit it back out, hammer it out as beats on the soles of shoes, a slight twist of the steering wheel turns the melody, and everything goes perfectly smoothly…. Or, as Joshua describes, be ready for “every kind of oh-no moment.”

To create his first album, “Seize the Means,” Joshua listened to every show he ever recorded as Radio Wonderland. He condensed tracks. Synced bits from different shows. All to make the most sonically good album possible. The album was a Village Voice “Voice Choice.” Check it out here: https://soundcloud.com/radio-wonderland.

After the State Theatre’s presentation of They Might Be Giants, on Saturday, April 21st, catch the TMBG afterparty at Geno’s Rock Club, 10:30 p.m. The afterparty will also feature Korovyov, Portland’s eclectic, accordion-accented rock. Tickets are $5.

Editor’s Note: Joshua Fried and his publicist Simon Brown want to support grassroots media, so they offered an exclusive Portland interview to the West End News. I spoke with Joshua in March by phone and he was generous with his time – this article could have been much longer. I want to thank Joshua and Simon for supporting independent local media.