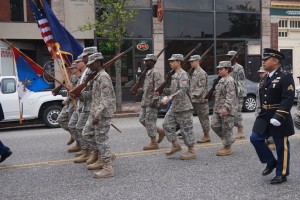 Portland Memorial Day events include a parade down Congress Street at 10:30 a.m. and a parade along Stevens Avenue to Evergreen Cemetery at 2 p.m.

On Monday, May 30th, the Portland Memorial Day parade will begin at 10:30 a.m. at Longfellow Square and process down Congress Street ending at Monument Square at approximately 11:00 a.m. Speeches will then be made along with a wreath laying ceremony.

Later in the afternoon on Memorial Day, the Friends of the Evergreen Cemetery will host the Third Annual Friends of Evergreen Memorial Day Procession at 2:00 p.m. The Friends group, along with veterans and community organizations, will honor veterans of all wars in a way that is reminiscent of Decoration Day, which was started around the time of the Civil War.

Marchers will assemble at Deering High School on Stevens Avenue and proceed up Stevens and end at Wilde Memorial Chapel in Evergreen Cemetery. Both lanes of Stevens Avenue will be closed to traffic for about a half hour.