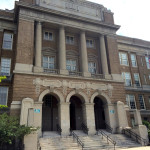 An 18-year-old Portland High School student was assaulted just before 10:30 a.m. on May 26th, near Oxford Street and Chestnut Street. The perpetrator approached her from behind as she reached into her parked car and he groped her.

The student immediately yelled, drawing the attention of another student that was passing by. This caused the man to flee on foot. He was last seen running on Chestnut Street toward Cumberland Avenue.  The student was not injured.

She immediately returned to Portland High and reported the incident to school staff and the School Resource Officer.

The perpetrator is described as a white man, with short blonde hair. He was clean shaven, 5’11” to 6’00” tall and has a slender but muscular build. He appears to be approximately 20-years old. And he was wearing a light gray shirt and dark blue sweat pants. The pants have a University of Maine logo on one leg.

Police have searched the area and are collecting video from area businesses. Additional patrols have been added around the school. No one has been charged at the time of print.

If anyone has any information that would help solve this crime they are asked to contact the Portland Police Department at (207) 874-8575.

The Portland Police Department regularly offers self defense training for women, Rape Aggression Defense (R.A.D.). R.A.D. training is a self-defense program geared toward realistic options for women in these types of attacks.

City officials ask for the public’s help locating three art bricks that were a part of the City’s public art collection. 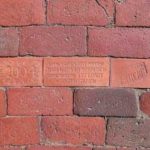 The bricks are part of Portland Brick, by artist Ayumi Horie and storyteller Elise Pepple. They were stolen from the sidewalk on Congress Street in front of the Maine Jewish Museum sometime in late 2016. This was the second theft of the art bricks in this location.

Portland Brick includes thirty sets of bricks installed throughout the India Street neighborhood. Each brick is accompanied by an audio story that can be heard on the Portland Brick website at http://portlandbrick.org.

The missing artwork consists of three clay bricks imprinted with the following: “On this spot in 2004, Rabbi Harry Sky brought Jews Without Borders to Congregation Etz Chaim #revitalization Portland Brick #29”

As of print, the artwork has not been recovered. If you have any information regarding this theft, please contact City staff member Caitlin Cameron at ccameron@portlandmaine.gov or at (207) 874-8901, or call the Portland Police Department’s non-emergency number at (207) 874-8575.