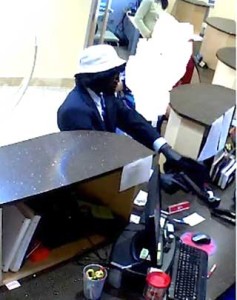 He displayed a black handgun and demanded money. As trained, tellers obliged, and he fled with an undisclosed amount of cash stuffed into a small dark bag. No employees or customers were injured during the robbery.

The FBI is assisting in the investigation.

Late Monday evening, May 25th, around 10:20 p.m. a father with his three kids was parking his car on Sherman Street near State Street.

The family was threatened by a thin black male, approximately 6 feet tall wearing a black hoody and a mask orbanddana covering his face. He brandished a handgun and demanded money.

The father and his kids, one as young as ten, fled on foot with all their possessions.

Unsatisfied, the samae assailant approached another vehicle just minutes later in the same area of Sherman Street. This time the car was occuppied by a lone 20-something Portland woman.

The suspect pointed his handguna dn demanded her purse. He fled runnin East on Sherman Street.

The suspect is a black male, approximately 6 feet tall, thin build. He is thought to be in his early to mid-twenties.