PLEASE, LEAVE YOUR CAR AT HOME! 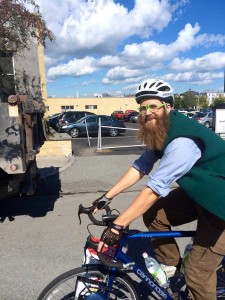 While riding my bicycle from a friend’s wedding rehearsal at the First Unitarian Universalist church on Congress Street, I was almost hit by a car.

For being almost maimed by 1.5 tons of steel barreling by me at high speed, I think my reaction was reserved.

After the car rolled past, thoughts rolled through my head as I realized the gravity of what just happened.

I could have just died. Why?

Were they texting and driving?

Did I almost become a statistic?

Where is this person going so desperately that they need to speed past me and almost hit me?

According to the National Highway Traffic Safety Administration, more than 12 people are killed every day of the year in accidents like the one I was almost in, with an automobile striking a bicyclist or pedestrian.

Apparently, the place where they needed to be in such a hurry was the next set of red lights, just 30 yards or so ahead of where the incident happened, where I found their car stopped at the intersection.

I rolled up alongside the passenger side of the car that was now stopped at the intersection. I wanted to assume the best, that the driver had just had a lapse in attention and didn’t even see that they had almost killed me. I just wanted to ask them to be more careful in the future.

“Pardon me, sir, but you almost hit me back there,” I calmly initiated the conversation.

Angrily he snapped at me, “Yeah, I heard you say ‘woah.’”

He went on to inform me that he was also aware that he’d almost hit me, and then deflected responsibility, asking “Why can’t you control that bike?”

Now even if I had been riding erratically, swerving back and forth, the legal obligation still remains on the driver to avoid hitting my 30-pound bicycle and totally exposed fleshy human body with their 1.5 ton, gas-powered, steel box. But, I was not swerving or riding erratically. I was riding my bike in the lane of traffic, in a straight line, using the Cycling Savvy-recommended method called “lane command.”

“Actually, sir,” I calmly replied, “the obligation is yours as a automotive driver to avoid hitting pedestrians and bicyclists. I just-”

Before I could finish letting him know that I just wanted to make sure he was more careful in the future, he cut me off again (this time verbally).

“I’m so sick of you bicyclists! You only get so much space!” he said, pinching his fingers to demonstrate a distance of about an inch.

“You think you can take up the whole road!”

He’s wrong. State law actually provides that bicyclists can take the lane of travel, provided that they remain as far to the right as is ‘safely practicable.’

But how far to the right is safe? Riding along a row of parked cars is a deadly endeavor to undertake. A door opened by a driver exiting their car without looking can cause a life ending collision for a person on a bicycle traveling at traffic speeds.

So given no bicycle infrastructure — like a protected bike lane — the safest place to be is often in the middle of the lane of travel. Except for today, with this particular driver.

I informed him that state law not only allows me to take the whole lane as a vehicle, but that as the driver of an automobile, he is obligated to give me 3 feet of space while passing.

The driver pointed to a police officer sitting in his car checking his computer over in the fire station parking lot and said, “There is a police officer right there! Why isn’t he arresting me?”

In my head, my response was, “Well, I can go over and ask him to explain traffic laws to you, if you’d like.”

But my instinct to be wary of police involvement was at odds with my desire to prove the rightness of my line of argument.  While I debated the proper course of action, the light turned green, and the cars behind us honked.

I pointed to the light and said, “You can look up the traffic laws yourself.  The light is green.”
We both went on our way.

If I was a more vindictive person, I’d have taken down his plates and reported him to that police officer as driving to endanger. I didn’t. Perhaps I should have.

I’m sharing this story here not to shame the driver, but to share my experience as a car-free bicycle commuter with all car drivers. Please drive more carefully out there. Or better yet, since most trips commuters take are a few miles or less, don’t drive at all — just ride your bike.

If you can help it, just leave your car at home. It’s dangerous.