Portland Conservatory of Music enjoys a resurgence in enrollment and activity

The Portland Conservatory of Music (PCM) is a nonprofit community Music School. PCM is dedicated to providing the highest quality music education to people of all ages, abilities and income levels. 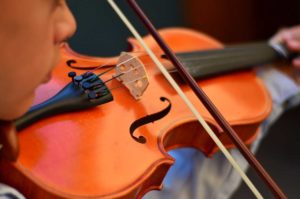 The Conservatory has resided at Woodfords Congregational Church since January 2008, but has been in existence for twenty-one years. And yet surprisingly, many residents of the Greater Portland area still don’t know about it or have any idea of the scope of the work they do.

Admittedly, the organization has struggled financially for at least the last decade. But it seems to be experiencing a resurgence thanks to new leadership at both the staff and board levels.

Since the arrival of its newest Executive Director, Jean Murachanian, in October 2015, the organization has embarked on a multi-point plan to boost enrollment, increase visibility, solidify branding, improve professionalism, enhance community connections and refocus on its mission.

The plan seems to have worked. Consider, for the eight months YTD ending February 2017, the organization reported a whopping 40% increase in revenue from additional enrollment. Combined with a meticulous tightening of expenses, PCM is thrilled to be back in the black again!

As you can imagine, with all this change going on it is an exciting time to be a part of the Conservatory. Faculty, parents and students have all seen the improvements, and the place is bounding with energy and excitement. The organization is thrilled to see this interest manifesting in new volunteers. They are stepping up to serve in a variety of ways, be it at the staff level or on the board. In fact, since the arrival of the new ED, the Conservatory has added five new board members, with several others in the queue.

The enhancements are also apparent in something as basic as the space it occupies. Like a young girl twirling in her new Easter dress, the Conservatory is showing off the good bones of the building it occupies. PCM started with fresh, bright paint throughout its studios and offices.  The painting was done by volunteers affiliated with PCM, as well as a crew from the Cumberland Country Jail’s pre-release program. There is even a new wall of faculty photos. The faculty wall serves as a signal to all that the Conservatory values its highly talented faculty.

The school educates through musical instruction and concert performances. With nearly fifty skilled instructors, it offers private lessons, group classes and ensembles for all ages and levels.

Its Karger College Prep program, led by Jeff Christmas, is an intensive Saturday course for talented high schoolers. It also boasts a Jazz Studies Division, led by Titus Abbott. The jazz division offers ensemble opportunities for both youth and adults, as well as group classes in jazz history and theory.

This summer, in addition to its regular programming, PCM is providing a variety of day camps. These include musical explorations for ages 6-13, and musical theater, rock and jazz for teenagers. It’s never too early or too late to discover the joys of creating music.

On the performance side, PCM presents roughly 75 concerts annually. Concerts include classical, jazz and everything in-between. Since its founding, PCM has offered free Noonday Concerts in downtown Portland to provide equal access to quality music. And it is a great opportunity to highlight PCM’s talented faculty and students.

Be sure to check out all the exciting things happening at the Portland Conservatory of Music, a longtime gem of the Portland arts scene.