Opium – What’s in a Name 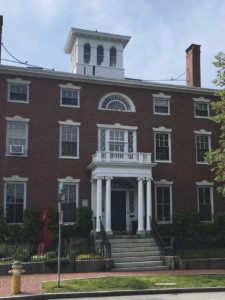 Claiming that the new name for the bar at The Danforth Inn’s is “…a metaphor for relaxing and having a happy time,” co-owner Raymond Brunyanszki, went on to explain that it “…will look more like a Shanghai opium den of the ‘20s — dark, very sexy and somewhat secretive.”

And, when asked if he would consider changing the name of the bar, Brusyanszki replied, “We’re not going to change the name, no.”

As Long As It Sells

According to the Hoey’s article, a NYC PR specialist released this statement on Brunyanszki’s behalf:

Opium at The Danforth Inn does not advocate or embrace drug usage, but rather is an ode to a period in time when social, artistic and cultural dynamism exploded in Shanghai during the Roaring Twenties — an era when the city was on the brink of change with the introduction of secret yet decadent and luxurious speakeasies, where rare teas, liquor and champagne reigned. Opium is derived from the poppy flower and symbolizes a magic, beauty and mystery that is a playful expression of the new bar and lounge we have created.

In the classic everyone-else-is-doing-it defense, Brunyanszki said that high-end cocktail bars and lounges named Opium have opened around the world.

He said, “Opium has also been used by several luxury fashion brands, most notably Yves Saint Laurent, who introduced their Opium perfume in the late 1970s. We’re pleased to bring this experience to the Portland community, underscoring our philosophy of responsible and moderate consumption of alcohol not just at Opium, but in all our restaurants and bars.”

Perhaps Brunyanszki is unaware that The Danforth Inn’s neighbor on the block is Amistad, Catholic Charities’ Recovery Center. Or perhaps he just doesn’t care.

Regardless, the indifference and irresponsibility in the choice and defense of the name “Opium” reveals a lot about him. It appears that for Brusyanszki, as long as it sells that’s what matters. And using words such as sexy, secretive, luxury and high-end in America today certainly can accomplish that goal.

Sounds like the marketing of cigarettes to women and kids. Remember, “You’ve come a long way, baby,” and Joe Camel? Years of advertising the cool factor of smoking and he camaraderie of drinking. Remember those companies’ denials that they were targeting the impressionable and the young.? They should have taught all of us something. Words – and the images they evoke – matter.

Usually we give a lot of deliberation in choosing names. After all, they reflect not only the establishment, but also the owners. Consider, is this business person aware of the people in the community, their aspirations, values, challenges, history? Does this business owner care about the community and its betterment? Further, are they trying to honor the history of the property they are currently stewarding?

We all make mistakes. In my opinion, the owners of The Danforth Inn have erred in choosing this name for their lounge. Certainly, there are other words evocative of the Asian ambiance to which they’re aspiring that would be more appropriate. And, I daresay, just as marketable.

There’s no shame in admitting you were wrong. You misjudged. You stepped in it. However you want to put it. Let’s hope Mr. Brunyanszki reconsiders and rectifies this unfortunate choice.