Oh No Cafe Review by The Portland Palate 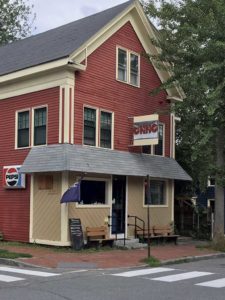 The site of Oh No Cafe is rumored to have once been a speakeasy. -Photos by James Fereira

This month I’m reviewing Oh No Café, Portland’s West End. Oh No has been a staple establishment at the corner of Brackett and Gray Streets for 15 years. Word has it that the building it resides in once housed a Speak Easy. I wondered if this manifested during Maine’s heyday as a progenitor of Prohibition in the United States?   “The Maine Law,” enacted in 1851, implanted Prohibition here, which remained in force at some level until 1933, with the ratification of the 21st Amendment to the US Constitution. This annulled the 18th Amendment, which established Prohibition. It is the only Amendment ever to be supplanted by another.

My friend and I weren’t imbibing, but nevertheless we wandered into Oh No on a weekday afternoon to grab a sober late lunch. They serve breakfast sandwiches all day, and carry limited sundries like soft drinks, juices, a nice selection of beers and wines, bottled water and Coffee By Design bags of brew.

In the rear, near their small kitchen, is a refrigerated case stocked with eggs and dairy. I wasn’t sure if Oh No sells these, or if they’re for use in cooking by the hipster staff who prepare beautiful food for their steady flow of loyal customers. Honestly, I didn’t have the fortitude to ask.

We placed our orders from the menu display board and paid at the counter. When they were ready, our names were called – about ten minutes. The man who took our order was perfunctory in his manner, and not especially affable, though he wasn’t rude either—just removed.

You can take your food to go, or sit at one of several small tables inside, along a window counter, or at a singular picnic table outdoor. We decided to eat-in on this visit, my first in a few years.

Oh No was playing a mix of rock music tunes, set at a reasonable volume for easy conversing, mostly.

There’s one main room, which is plainly decorated and furnished, save for a menagerie of aluminum foil figures. I think these are creations by a local artist that I met some years back, while I sat for dinner with friends in the Old Port. For a presumed customary donation, he made art before our very eyes – a flower, for a friend’s wife. His sculptures are odd and interesting, and are popular about town. 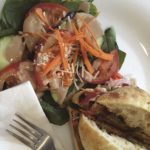 My friend grabbed a local bottled root beer, and I, a can of orange soda. His sandwich choice was the crispy crab cake on ciabatta roll, with sweet Asian slaw, homemade mayonnaise and cilantro. I ordered the grilled shrimp BLT on ciabatta with spinach, bacon, tomato and mayo.

They came with a side. I am fussy about my pasta and potato salad, and was not familiar with Oh No’s version, so I went with the safer spinach salad with onion, tomato, cucumber, carrot, shredded cheese and vinaigrette dressing.

My BLT was delicious. It seemed a clever idea to feature shrimp. And the ingredients held-up well on the substantial roll.

My friend’s choice: not so much. While he enjoyed his meal, he thought that the mild flavor of the crab cake was lost in, and dominated by, the bread. 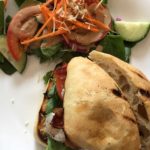 Our salads however, we agreed, were a nice complement to our mains.

Lunch for two came to $27.00 including tax and jar-on-the-counter gratuity.

We would go back.

Oh No seems to have a dedicated following, and has established itself as a cool, cheap-eats hangout in the West End. They are located on the #8 METRO bus route at 87 Brackett Street, and if you insist on driving, there is street parking. They are also easily walkable from downtown, about 15 minutes from Congress Square. Phone number: 207-774-0773. They’re open Tuesday through Friday from 6:30 a.m. to 8:30 p.m., 8 to 8 on Saturdays, and 8 to 3 on Sundays, and closed Mondays.

Check-out Oh No Café. I suspect you won’t utter the shocking exclamation out loud, nor under your breath, while enjoying their satisfyingly creative, affordable fare.

James has a background in Outward Bound, painting houses and skinny-dipping. In his spare time, he enjoys photographing food and questioning authority. James can be reached at ThePortlandPalate@gmail.com.