Obama’s Wars and the Liberals Who Love Them 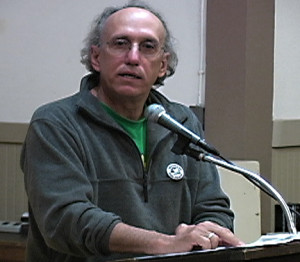 Bruce Gagnon addressing a crowd at an antiwar event.

Drivers who adorn their vehicles with numerous stickers sometimes end up conveying contradictory messages. For instance, I often see cars in Portland with peace symbol stickers or phrases like “War is not the answer,” alongside one for “Obama/Biden, ’12.”

The irony, of course, is that President Barack Obama–a Nobel Peace Prize winner–has proven to be a greater warmonger than George W. Bush.

Our imperial wars and overseas presence have more than doubled under Obama. The U.S. continues to maintain troops in Iraq and Afghanistan–the latter now the longest-running war in U.S. history. And Obama has ordered aerial attacks and drone strikes in Yemen, Syria, Somalia, Pakistan, and Libya.

Indeed, Obama has not rejected but codified the Bush administration’s criminal foreign policy of “preemptive” war, under the rubric of the interminable “War on Terror.”

Earlier this year, the President called for a 4.5 percent increase in overall military-spending, including $534 billion for a “base budget for the Pentagon, plus $51 billion to fund U.S. involvement in Syria, Iraq and Afghanistan,” according to a February installment of Democracy Now!

Finally, and perhaps most disconcertingly, Obama has assumed the authority–in direct defiance of the Constitution and the rule of law–to assassinate at will any individual, including U.S. citizens, his administration deems a “terrorist.” (See: Anwar al-Awlaki and his 16-year-old son, Abdulrahman al-Awlaki–both U.S. citizens.)

Yet, despite Obama’s increased militarism, the antiwar left is nowhere to be found. Thousands of Americans joined with people across the globe to denounce Bush’s unwarranted and unconstitutional war in Iraq in 2003. Collectively, these were some of the largest antiwar demonstrations in the world.

But the antiwar movement has all but evaporated under President Obama. Local liberal advocacy groups like the Maine People’s Alliance and the Voter Education Brigade (Formerly the League of Young Voters) have never challenged the president on his foreign policy record.

The reality is a majority of “antiwar” liberals support Obama’s wars and extrajudicial killings. A 2012 Washington Post-ABC News poll found broad bipartisan support for the president’s use of unmanned predator drones, with “fully 77 percent of liberal Democrats” approving of their use. Likewise, the Post‘s Greg Sargent found when it comes to Obama’s practice of arbitrarily assassinating American citizens, registered Democrats approve of the practice 58-33 percent, and liberals approve, 55-35 percent.

As Sargent observes, “It’s hard to imagine that Dems and liberals would approve of such policies in quite these numbers if they had been authored by George W. Bush.”

According to antiwar activist and organizer Bruce Gagnon, this is what happens every time the occupant of the White House is a Democrat.

“The antiwar movement has stagnated just as it did during Bill Clinton–and Jimmy Carter,” said Gagnon. “Liberal Democrats are reluctant to challenge the president when he’s ‘their guy.'”

“It’s a real hypocrisy,” he adds. “And it’s a real problem for maintaining an active antiwar movement.”

Gagnon, a resident of Bath, is the coordinator and co-founder of the Global Network Against Weapons and Nuclear Power in Space. His blog, Organizing Notes, offers his daily reflections on his antiwar activism and “the state of America’s declining empire.” Gagnon is also a longtime member of Maine Veterans for Peace.

Part of the problem, Gagnon explains, is how deeply entrenched so many progressive organizations are with the Democratic Party. Like unions, the antiwar movement remains tied to the hip of a warmongering Democratic Party that shares none of its values and does little to advance its interests. Indeed, it is worth noting that all of the United States’ major wars in the 20th century–World War I, World War II, Vietnam, the Korean War, the war in Yugoslavia–were launched by Democratic presidents–not Republicans.

As socialist author, Paul D’Amato writes in his book, The Meaning of Marxism,

The history of the two-party system shows that electing the lesser evil demobilizes mass struggle by putting the masses’ faith in the actions of bourgeois politicians. It lowers the political level of the movement, too, because it compels activists to become apologists for a party that does not represent their interests.

Given the partisan nature of liberals when it comes to issues of war and peace, is there any hope of establishing a permanent, organized antiwar movement–one that continues to operate and remains true to its commitment to peace and social justice regardless of which party happens to be in power?

“Well it’s certainly not an easy task,” said Gagnon. “My strategy is to organize globally. We need an international peace movement–one that is not merely dependent on Americans. We also need to recognize that America is a colonized nation–colonized by corporate power run amok.”

Those of us on the left committed to ending war as an instrument of foreign policy will only do so by working outside of the traditional levers of power. This means building up third parties like the Green Party. But it also means mobilizing the working class to ultimately overthrow the root cause of imperialism–capitalism.

For Gagnon, the inherent link between imperialism and capitalism is all too obvious.

“What is America’s number one export product?” Gagnon asks rhetorically. “It’s weapons. We need to understand when we go to war, the main beneficiaries are, by and large, [weapons manufacturers like] Raytheon, Lockheed Martin, and General Dynamics.”

Our imperial wars in Iraq, Afghanistan and throughout the Middle East have not made us safer as a nation. Quite the reverse, they have further inflamed anti-American sentiment, putting us at greater risk for future terrorist attacks. It is precisely this anger and resentment that spawned the militant al-Qaeda offshoot, ISIS.