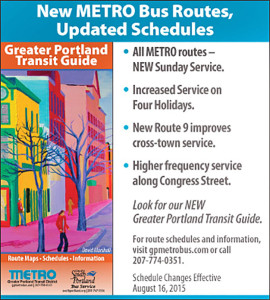 The new Route 9, the Crosstown Loop, is made out of the old Routes 3 and 6. The Washington and Stevens Avenue stops that were once Routes 3 and 6 are now covered by Route 9. Add 3 plus 6 and you get to 9.

Route 9A will start from downtown Portland starting at the Library and travel west along Congress Street to Stevens Avenue. It turns north onto Stevens and goes to Morrills Corner, and then heads via Allen Avenue to Washington Avenue. It then turns south via Washington back to Congress Street, and the loop finishes by heading west on Congress back to the Library. This creates a continuous clockwise loop.

Route 9B leaves from Monument Square and heads east via Congress Street to Washington Avenue, travels north via Washington to Allen, and returns downtown via Stevens and then Congress, completing a counterclockwise loop.

Students attending Portland’s three high schools  – Portland, Deering and Casco Bay – will take METRO to and from school beginning in September. Routes 9A and 9B will include added frequency during school days.

Visit gpmetrobus.com or call 207-774-0351 for route schedules and information.