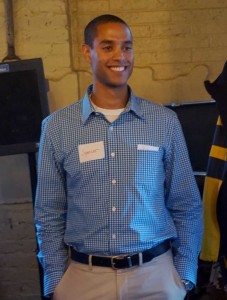 Spencer was asked what the biggest challenge facing the city was. He had a simple answer, “Growth.”

Spencer noted throughout his campaign that Portland could outgrow many of its problems, such as affordability, as long as infrastructure was improved to facilitate growth.

When asked what about Spencer’s background makes him unique among City Councilors, he let his sense of humor show.

“I am likely the only Councilor who is a ‘pro’ at doing the ‘Whip and Nae Nae’ dance at weddings,” he joked.

We’ll have to inquire of other Councilors if that is indeed a fact, or just bragging.

Spencer was also asked how he views his role on the City Council and how will he choose to work with other Councilors, City Staff and constituents.

“My role, initially, will be to learn the position of Councilor. The Council has a perfect balance of institutional knowledge and new energy and ideas. I could not be more excited to work with this team,” Spencer said.

“As for working with other Councilors, City Staff, and constituents, my goal is to be as responsive as possible and open to a variety of ideas to solve the issues facing Portland,” he continued.

“I think the Council is positioned to work collaboratively and I plan on teaming up with my colleagues to address the issues facing Portland.”