Posts
Home News Briefs Know It All Is it stock, is it broth… maybe it’s just a good idea?

Is it stock, is it broth… maybe it’s just a good idea?

“Those that scraped the fire were slaine with the sword; some hewed to peeces, others
rune throw with their rapiers, so as they were quickly dispatchte, and very few escapted.
It was conceived they thus destroyed about 400 at this time. It was a fearful sight to see
them thus frying in the fyer, and the streams of blood quenching the same, and horrible
was the stincke and sente there of, but the victory seemed a sweete sacrifice, and they
gave the prayers thereof to God, who had wrought so wonderfully for them, thus to
inclose their enemise in their hands, and give them so speedy a victory over so proud
and insulting an enimie.”
-William Bradford, leader of the Plymouth Colony, Massachusetts, Of Plim̃oth Plantation 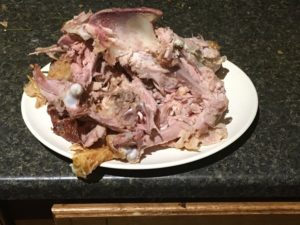 “This day forth shall be a day of celebration and thanksgiving for subduing the Pequots,”
-Massachusetts Bay Governor John Winthrop’s proclamation

You may have a “turkey” with a paper plate as a body on your refrigerator yet your
child made in celebration of the “First Thanksgiving” and native people’s generosity in
saving the starving crackers but more importantly, you may still have a partially
consumed fowl in your fridge. What to do? 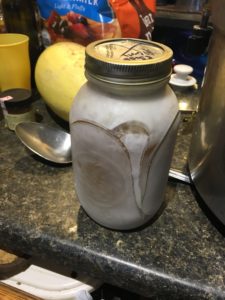 Use freezer safe canning jars, do not over fill.

Don’t pitch it, and don’t compost it, at least not yet. There is a wealth of meat there, you’ll be astonished at how much you get but better yet, there’s a bounty of what you need to make greens next spring; broth. There’s a reason that years ago carcasses were always boiled down, not only are you getting meat that you otherwise couldn’t, you’re getting home made, chemical and preservative free broth that’s incomparable to anything you can buy.

Something to make it from: whether bones, meat, fish, or vegetables.Stock always includes bones in it’s making, which are sometime first roasted to make for a richer, more deeply colored product along with a combination of mirepoix (mixture of onions, carrots, and celery) and sometimes aromatics in water. Broth is anything that has had meat cooked in it and is normally seasoned and cooked for a shorter time than is stock. Stock is thick and gelatinous, broth is thinner.

Something to cook it in: 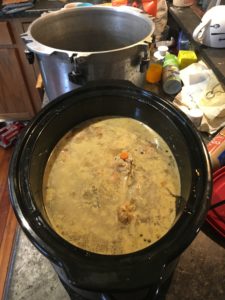 Straight out of the pressure cooker and into the crockpot… this is after only 30 minutes of cooking!

You’re going to be cooking for a bit and while stock is cooked for longer, broth still spends up to two hours on the fire so unless you’re planning to be busy in the kitchen for as long as it’s going to take I’d point you toward a crockpot, but if you want to go old school or save money a heavy bottomed stock pot on a stove’ll do you.

What this means, and what I do is pressure cook my stock mix at 10-15psi for 30 minutes BEFORE I put it into the crockpot overnight on low.

Stuff to put in it:

Follow a recipe or if you’re coming up with your own here’s some common ingredients: 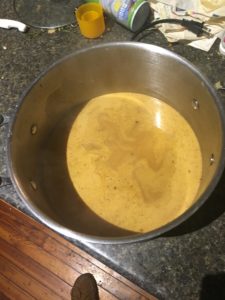 After the solids have been strained out.

Let’s say there’s a turkey carcass languishing in your refrigerator right now, here’s what I’d do with it: Break it apart and brown it in a fat on the stovetop. Then I’d put the turkey, vegetables, seasonings and water into my pressure cooker and cook it at 10-15 psi for 30 minutes (normally I use an antique All American that doesn’t automatically maintain constant pressure). After that it will look very different, almost as though it’s ready but I then put it into a crockpot on low, overnight to get every last bit of flavor and nutrition from it that I can. After that I remove the bones and any meat still attached to them, the meat from the stock and strain the stock into freezer safe mason jars up to the freeze line and put them in my freezer, ready for summer greens at a moments notice! The left over meat is good for sandwiches or great for a potpie and the bones are pretty spent so compost or trash them. 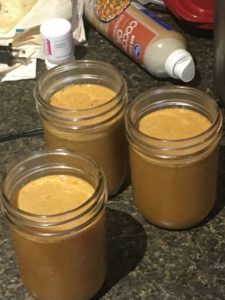 Magic or mythic? Bone broth is at the center of a brewing cultural divide, The
Washington Post, 8-22-17

Cooking the History Books: The Thanksgiving Massacre, Republic of Lakotah, 11-22-
2009

The Massacre For Which Thanksgiving Is Named, Native American Netroots, 11-22-
2009

Christian L. Torp is an attorney, missionary, activist, urban-farmer, master gardener,
foster parent and advocate for social change who lives at Justice House (facebook:
Justice House) with his wife, Tanya and son, Atticus in Lexington, KY. If you have any
questions or comments for Christian, or there’s something you’d like to know more
about, please reach out to him at theamosfarm@gmail.com