WEN Editor Tony Zeli had a chance to interview new Mayor Ethan Strimling shortly after his successful campaign to unseat Mayor Michael Brennan. We met in a mostly empty room at City Hall, where Ethan is “squatting” until the official transition into office. 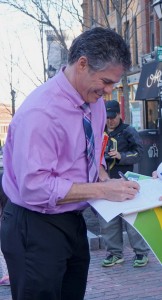 Ethan is the first Mayor from the West End since Karen Geraghty (’01-’02), we were interested to know if living downtown would provide any unique perspective for the new mayor.

“There is a widening chasm between the ‘haves’ and those who are seeking services. There is a fear around the city that we are becoming too stratified and that the middle class is getting squeezed out…”

The affordability issue is what Ethan believes is the biggest challenge facing Portland.

“There is a serious problem that has been brewing for a while. It’s not like it all of a sudden hit. Those of us on the ground doing the work have been seeing it, and I think people are very scared of where we are going. Keeping our city affordable at all levels, and certainly around housing will be my primary focus.”

Ethan did not offer any specific policy ideas, but he did offer that creating more housing units would be his top goal.

“What I proposed during the campaign, and what I certainly will be pursuing, is trying to permit more housing in the city at all levels.

“I proposed in the campaign that we should do 2,000 units of housing in the next five years.

“We were supposed to, based on our housing plan, do 4,500 units of housing over that same ten year period, and we only did about half that. That is part of why we have this crisis.

“We’ve got to figure out how do we permit more housing. That is certainly part City government’s responsibility — how do we get the process moving more quickly. But also, what are we doing out in the community to build housing, to incentivize housing, etcetera.

“There are a lot of good ideas out there. My job is to bring people together to find the best one,” Ethan said.

It might not be easy to bring everyone together. Currently on City Council there are four former Mayors: Dave Brenerman, Jill Duson, Nick Mavodones, and Ed Suslovic. Several of these Councilors openly quibbled with out-going Mayor Brennan.

With limited power, Mayor Ethan Strimling must figure out a way to turn their experience into something useful as opposed to challenging.

“My job is to turn that body of nine into a body of one. To build the relationships with each person so that they are feeling heard and their perspective is being incorporated, so that we can find answers that help move us forward,” Ethan continued.

“It doesn’t mean that we are going to get nine to nothing votes every time. Not in the least. But it means everybody will hopefully feel like their perspective will be part of the conversation. The other piece of my responsibility is to make sure the community feels the same…”

But how will Ethan take it from listening to achievable goals?

“[Listening] is the only way to help… You will fail almost every time on your goals if you don’t listen first. Listening is the key to all of it, because you have to understand what the problem is,” he said.