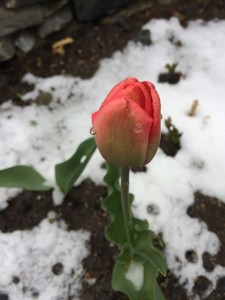 A late April snowfall reminds me yet again not to take anything for granted in Portland. Life here is rich with contrast and surprise. Not in a big in your face New York way, but in a peel back the layers kind of way. Living in Portland offers constant opportunities to practice resilience and take change in stride.

It starts with the weather of course, the cold, of which the April snowstorm is a mischievous manifestation. Everyone learns to cope with winter. People here are used to spending time just getting ready to go outside, and expecting their children to do the same.

It took me two winters to learn how to layer on enough clothing to be warm indoors or out. Walking between snowdrifts sometimes I pass veiled women and hope they have what they need to be warm.

Then the sun comes out, the temperature rises to 45, and runners race past with arms and legs bare. Meanwhile I am still daunted by the knowledge that however warm it may seem, if you fall out of a boat in Casco Bay you can die in twenty minutes in the water.

That’s just the climate. Portland itself has been changing continually since Europeans wrested the peninsula from the people who lived here first. The grace, design, and materials of old houses in the West End suggest a kind of permanence. Yet often the insides have been reworked many times to accommodate revolving inhabitants – sometimes people of wealth, but often working class Mainers and families of immigrants from other parts of the world.

In the sixties, my neighbor used to go to wild parties at a dilapidated house next door.  Years later she came back to Portland, bought that house, and rebuilt it so it gleams.

There are lilacs and rhododendrons in my front yard, and lately, used syringes in the underbrush.  And sixteen inches down in the garden is a layer of ash reminding us of the town that burned 150 years ago.

Behind my house there’s a little park, where small children learn that it’s hard to climb up the slippery side of the slide, and that only one child can ride the rocking dinosaur at a time. Neighbors tend flowers around the edges, middle school kids hang out on the swings and dogs roll on the grass.  The park was created after a house on the site blew up because of a gas leak. 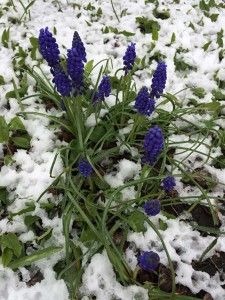 Another more recent explosion took out a house on the corner, which is now rebuilt and almost looks as if it had always been there, though its perfect paint and angles have yet to relax into the company of its neighbors.

Despite April’s snow, the days are lengthening and everyone is leaning joyfully towards summer. My first summer here I was surprised to see how soon after midsummer the northern light begins to shrink the days and turn towards fall.  But now I’ve learned to appreciate that other shift in December that pulls us through the dark winter with gradually expanding light.

Turns out the flowers welcomed the April snow, which sank into the ground more gently than rain, and inspired a burst of growth.  Another lesson learned.

Pamela Shaw lives in the West End, where she is volunteering on various projects with the West End Neighborhood Association, including an initiative to help older neighbors remain in their homes.