It isn’t easy being a small business owner anywhere. But to survive in the Old Port for over 40 years is truly a feat that requires perseverance. 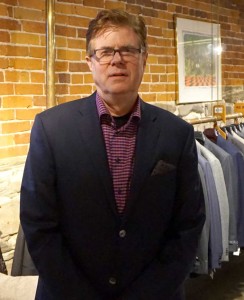 Born and raised in the West End, Joseph Redman opened the specialty mens clothing store, Joseph’s, in October of 1974. It has survived in the same location, at 410 Fore Street, ever since.

Joseph’s family moved to a home on Neal Street in 1956 — his parents lived there until last year. He attended the Butler School, King, and Portland High. He later graduated from Bowdoin.

After a stint in the army, Joe got an MBA in Entrepreneurship. He wrote a thesis on a retail clothing store and then decided to just do it.

“The object was to identify something in your market that is missing,” says Joseph, “At that time we didn’t have any store of major impact [in downtown Portland].

“We were the first major non-restaurant/bar in the Old Port.”

Joseph was happy to open a business in his hometown, “It was comfortable to open here… At the age of twenty-four, I felt secure here.”

A lot has changed in the neighborhood since ’74, but the influx of retailers and boutique hotels has only helped Joseph’s. Sure he has a lot of local customers, but no specialty store survives solely on local traffic. The store is frequented by visitors to Portland, who have second homes here or are staying at the local hotels.

“We represent the best of Portland. We’re consistent. We’re honest, and we’re authentic,” says Joseph of the store’s success.

Classic style describes the clothes that hang at Joseph’s, but also describes the entire building that houses the store. Built in 1809, it survived three fires.

Joseph focused on keeping the building authentic. They built stairs from the wreckage of an old grain elevator that was on Commercial Street. He worked hard over the years to preserve the space. Being from Portland, he understands the importance of the architecture and history of place.

“I think the building represents the positive aspects of downtown Portland. It is a beautiful space,” says Joseph.

After years of living near the family home in the West End, Joseph moved to the burbs on Capisic Road, but he still loves the old neighborhood.

He believes the Old Port will be a stable part of town, too. So much has changed and for the better. As far as Joseph is concerned, the Old Port just needs more of the same.

“I hope we don’t get inundated with chains,” he adds.

“I’m a bit of a snob,” he says with tongue in cheek, “but I have a high ethical standard and visual standard that I hope is maintained [in the Old Port].”

Joseph has invested a lot in the neighborhood and wishes for the same from others.

So, how did Joseph do it? Forty years of success is quite the achievement.

Maybe he picked that up growing up in the West End.

You can check out Joseph’s online at http://www.josephsofportland.com/