Between 50 and 60 neighbors from Carleton, Pine, Neal, West Streets and others, attended the neighborhood meeting on a proposal to build 37 affordable housing units.

The apartment building would replace a parking lot, and many neighbors showed their anger at losing up to 56 spaces — not to mention potential increased demand for parking from new tenants.

Affordable housing nonprofit Avesta owns the property, and they say there is a two-year waiting list for their units. 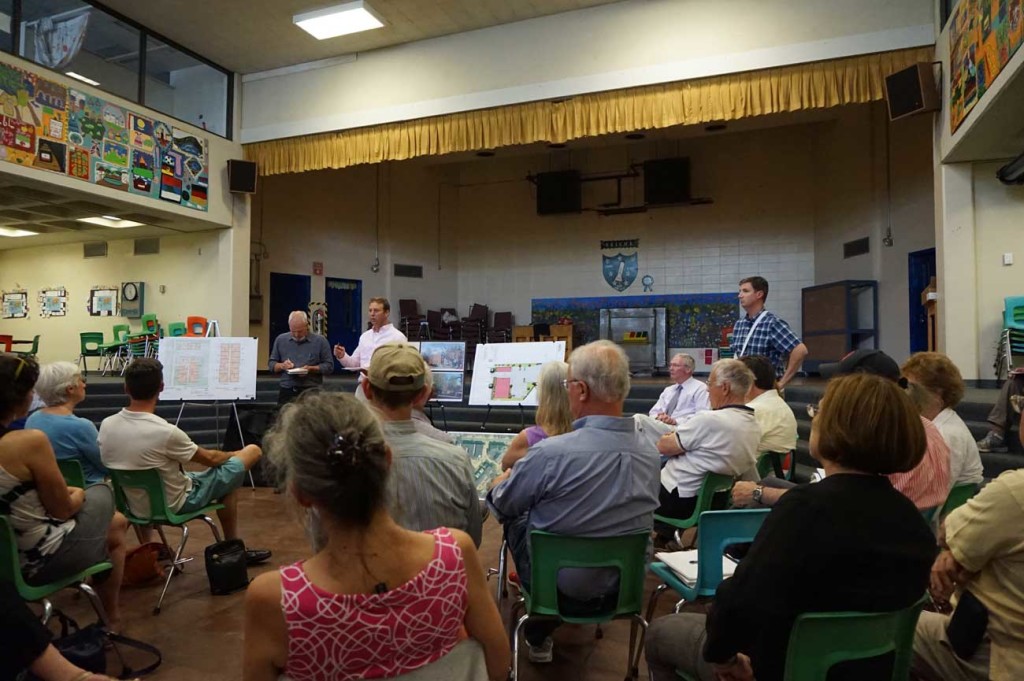 Avesta reps pitch their development to the neighborhood at Reiche Community School cafeteria.

No one argued the need for affordable housing, although some argued that Carleton Street, within the affluent Western Promenade neighborhood, was not the right location.

The project would replace a 58-car parking lot at 17 Carleton Street behind the Butler School apartments. The issue that brought most out was the lost of almost all of those parking spots.

Those who use the lot include neighbors living at 20 and 30 West Street. There is a waiting list for spots in the lot. Residents wanted to know where they were going to park.

“We understand that parking is a major concern,” said Drew Wing.

He did not offer any solutions. Avesta will provide 31 spaces to meet City requirements for the new building. The City requires one new parking spot per new unit. Avesta will offer a car share program, reducing the parking requirement by up to seven spaces.

Avesta also owns the Butler School, and they will retain two parking spots for that building. They estimate that there is a need for about 10 spaces from Butler School residents. Avesta representatives stressed that the need for parking generated by other neighboring properties was not Avesta’s concern.

This inflamed passions from many attending. Avesta was called callous and uncaring. Clearly, the meeting did not abate concern about parking.

Neighbors were also concerned about storm water drainage. The neighborhood has a history of overflowing storm drains during violent storms. The development would include rain gardens and catch basins that the City has approved as adequate, but many had their doubts.

Still others were concerned about the building’s design. It will have a brick facade, and must pass historic preservation review.

Architect David Loyd said of the design, “I like to think of it as nice background architecture.”

Given that the property is privately owned by the developer, and that the proposed building meets zoning requirements, it is likely that project will move forward.

The project must go before the Historic Preservation Board and the Planning Board. Concerned residents can participate in the public process at these yet to be scheduled meetings.