cPort and Bank of America Robbed 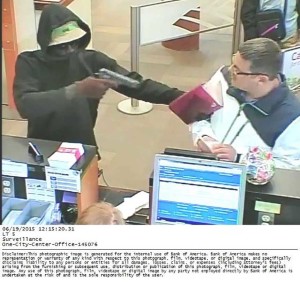 Portland Police are investigating two bank robberies that occurred early on June 19th. They appear to have been committed by the same perpetrator.

The first robbery occurred at the cPort Credit Union at 285 Forest Avenue at 11:55 a.m. The second occurred at 12:20 p.m. at Bank of America located at One City Center.

In both cases a black male entered the bank brandishing a handgun and demanding cash. He fled on foot after receiving an undisclosed amount of cash from each bank. No shots were fired and no one was injured.

A reward of $10,000 is being offered for information leading to an arrest and successful prosecution.