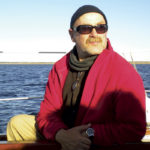 Before we get to the Bonobo review… One activity I find myself in as a newly-out writer is collaborating with my handful of published writer-friends. While re-reading June’s WEN review on new West End markets, I found myself amused at my own pontificating. So, I called a close friend and writer who appreciates my sarcasm. What I apparently wanted from her, was feedback in the form of approval. I should have known better. She would give me something real- not the fluff that I expected.

She loved my writing, she said, and emphasized this before upbraiding me for an invidious personal attribute: class-ism. I wanted to argue, but I couldn’t. Fortunately, she wasn’t able to see me, because I was suddenly wearing egg on my face, and it was dripping down my chin in a yellow glow of radioactive shame.

In that moment I’d become painfully aware of my own “-isms.” I purport that those of us who consider ourselves rational, educated human beings (a.k.a., West Enders) are not bemused with having to face our own demons, our political incorrectness, judgments and foibles. In short, our -isms. Yet, here was a doozy staring me in the face: my own classism. To be clear, I take no pride in it.

My friend  pointed-out that I slammed the “overlooked” markets in the May WEN issue over their skank,  yet I failed to criticize the “new” markets similarly, such as avoiding scuzzy door handles. Instead, she noted, I opted to dis them for their gentrification. She was right.

That’s classism on both ends, Guilty!

Tracing this back to my past (isn’t that ultimately where we find our unfinished business?),  I realized that my blue-collar roots growing up in the 1960’s in a rich suburb north of Boston had set me up to straddle the line between privilege and poverty. Indeed, I had come out on the divide, still struggling to get a firm grip on either.  This might always be my challenge. Fortunately, I have a dear writer-friend who isn’t afraid to call me on my bull, and help me be better, whether because of or in spite of it.

Armed with a new self-awareness, I embarked on my next WEN review, this month: Bonobo Wood Fire Pizza. Located in West End central, at the busy intersection of Pine and Brackett Streets, it’s been in business now for exactly a decade. Slices are often available, as are take-out and delivery.

A unique feature in the summer, Bonobo has an ice cream walk-up window located on its Pine Street side.  That I know of, it’s the only such place like it in the West End.

On the Bonobo website is a link to a preservation organization dedicated to protecting the dwindling population of the endangered apes for whom the pizzeria is named.  They live exclusively in the Democratic Republic of Congo, and are known for their intelligence, emotional capacity and abundant sexuality. Poaching,  hunting, habitat degradation, disease, and economic/civil unrest are all contributing threats to the peril of these special creatures. And despite their reputation as unapologetic nymphos, bonobos produce offspring on average only every four to five years.  That’s a lot of fornicating without much to show for it, but who can fault them for a lack of enthusiasm? Let the sanctimony be left to the humans.

Bonobo mainly does pizza. About sixteen of them are available daily, including a build-your-own option. On this late-spring evening it was swelteringly hot. I don’t know how or why the staff hadn’t quit, or passed-out, in what felt like Hades in the dining room. Few patrons were inside. We were lucky to snag one of two outside tables. Uncomfortable as the metal chairs were, we felt relieved to be outdoors … tables thoughtfully set with four-feet clearance of sidewalk space. Whether by chance or design, we approved.

For a beverage I began with a glass of Taste of Cotes DeGascogne white wine, and as my gal friend is partial to Malbecs, she ordered an Argerio from Argentina. She really liked it, and I, mine.

Then, I both craved and felt responsible to order a salad knowing we’d soon be diving into an indulgent panoply of bliss-pie. The Caesar salad with shaved parmesan was humongous: enough for two or three,  and white anchovies brought a saltiness to an otherwise insipid salad.

Emily, our server, was welcoming and played along with our silly moods. She kept our water glasses filled for good hydration on this steamy night.

We ordered two pizzas, split two types per slab, as Bonobo offers. My friend chose on special, The Barbie: pork sausage, spices, and house-made BBQ sauce; paired with The Farm: pork sausage, mozzarella, roasted onion, oregano and red sauce. Both were flavorful and delicious, sweet and spicy, each in their own robust way.

Bonobo’s crusts are thin…  and they offer a gluten-free choice for a nominal charge. I chose white pizzas. The Gruyere: the so-named fromage, potatoes, prosciutto, spinach, leeks, parmesan and roasted garlic butter. It had great flavor, and was combined with The Ocean: white clam sauce (no clams), cream, parmesan, garlic and scallion. It fell  short of memorable, which might explain why it’s the least-ordered pie on their menu, we were told. Perhaps it should be removed, or just put the damn clams in there! 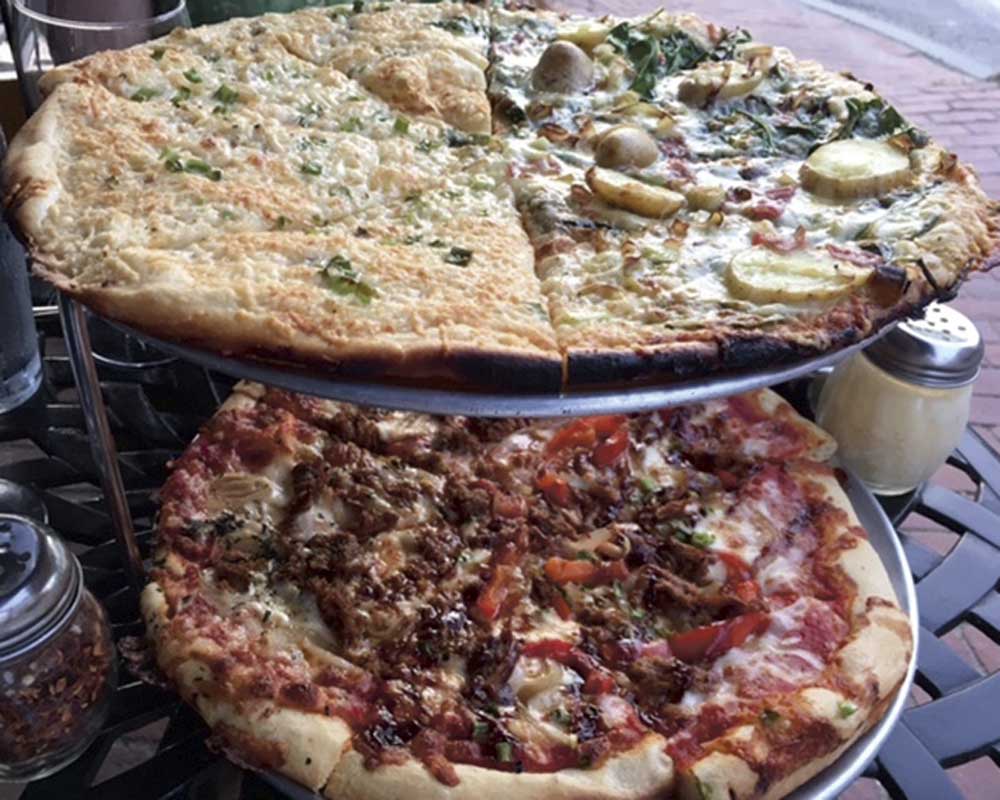 I  recall the quality of Bonobo’s pizza being better in its earlier days, and have been back a few times to confirm this. That being said, I think their pizza is still above average, and they surpass the chain companies with their creativity and for celebrating local products. They support some Maine small farms and businesses, which their website lists.

No nitrates, hormones or antibiotics in meats will be found here. Our meal came to about $55.00 including tax and gratuity.

Bonobo is located at 46 Pine Street. They are open seven days for lunch and dinner. Phone: 207-347-8267. It’s a casual and friendly local joint in which to have a spontaneous meal out. It’s also on the #8 METRO bus route, the nearest stop being 2 blocks away at the corner of Lewis and Pine Streets, or a short walk from Longfellow Square. For cars, parking is on the street. Be aware of posted time-limits and sign restrictions. Go to http://bonobopizza.com for details.

Visit Bonobo, and when ordering tell them The Portland Palate sent you! See you next month.

James has a background in community organizing, zip lining and building sweat lodges. In his spare time, he enjoys a good stiff drink and questioning authority. James can be reached at ThePortlandPalate@gmail.com.