On July 14th an action organized by Portland Racial Justice Congress led to the arrest of 17 protesters for Obstructing a Public Way. The action was prompted by the police killings of Philando Castile in Minnesota and Alton Sterling in Louisiana. The Black Lives Matter protest demands include body cameras for police and greater citizen review. 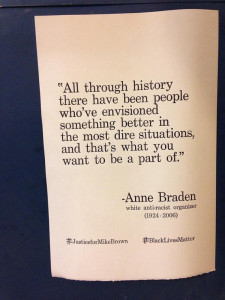 During the action many protesters blocked traffic on Middle Street in front of Police Headquarters. Police arrested 17 people. The arrested were mostly young adults including a 16-year-old.

We ask that Police Chief Sauschuck release a statement acknowledging that there is a nationwide problem with the brutalization of black and brown bodies at the hands of law enforcement. We ask him to affirm that black and brown lives matter and that his department is committed to creating trusting relationships with the people of color in the neighborhoods they police.

We ask that Police Chief Sauschuck instate the use of police cameras in order to promote safety and accountability.

In a statement released to media, organizers said that they believe it was a “white agitator” that put their lives at risk. The person in question slowly drove his vehicle into a line of peaceful protesters who were blocking the street hand-in-hand. According to organizers the driver had the option to detour around the protest by making a left on Franklin Street.

After the arrests City Manager Jon Jennings released a statement that said in part, “The commitment and professionalism shown by every member of the Portland Police Department is a tremendous example of what makes this city great.”

“To those who feel the pain of injustices occurring across our country, your anger is understandable. Innocent lives are being lost – both civilian and sworn personnel. Orlando, Dallas, Minnesota, Louisiana – there are more. Your anger is, in many cases, justifiable. I’m angry too. To those who are moved to protest, I urge you to do so peacefully. I urge you to join the dialogue and work with the city and our police department to make sure your words are heard and not overshadowed by breaking laws meant to keep people safe.”

Portland Racial Justice Congress is firm in their decision to disrupt business as usual saying, “We are proud to have created public space for black mourning and anger, in a world where our voices are censored, silenced and shouted over.”