Warmer weather always brings Portlanders outdoors from the many months spent inside waiting for the seemingly endless onslaught of northern New England winters. It is no surprise to see an increase in the amount of bike traffic in our fair city.

“Especially right around Portland, it’s gotten a lot more comfortable for people to ride. The Bicycle Coalition [of Maine] has done a really good job. I think we see more people coming from out of state to rent bikes to ride around Portland, so biking really has increased in popularity in the area.” Said Eddie Quinn, manager of the bicycle shop CycleMania. 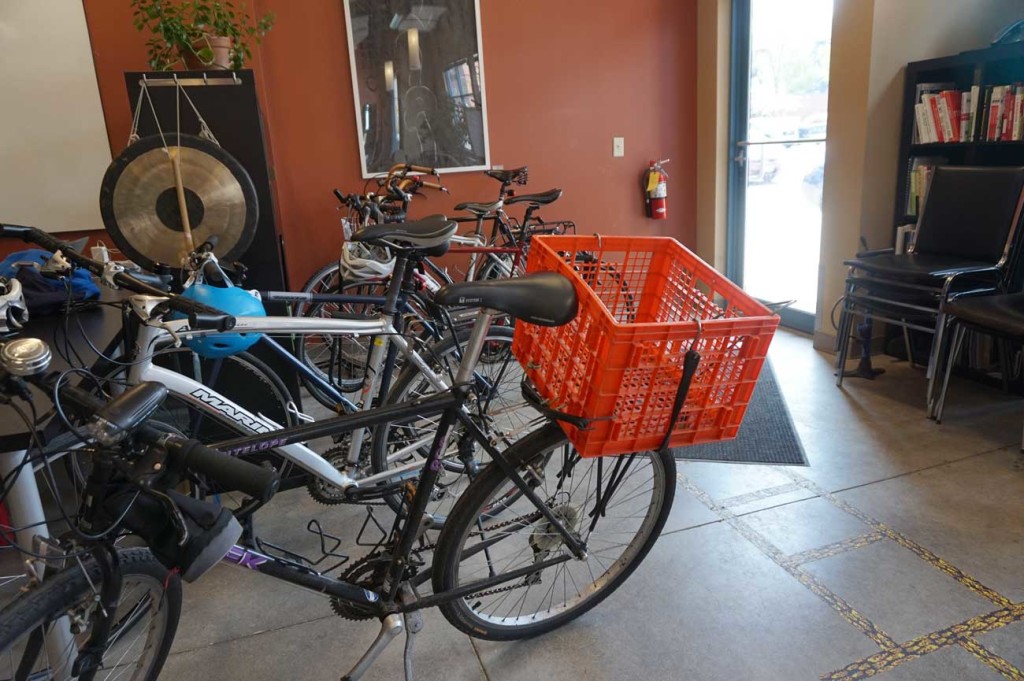 Bicycle parking is crowded at Peloton Labs on National Bike to Work Day, May 15, 2015.

Kris Clark, manager of Back Bay Bicycle also stated that biking in Portland has increase particularly among the millennials. “Nationally bike sales are sort of declining in some ways. A lot of millennials have really taken to the sport. Portland has become a really hip town. We do see an increase in people in their 20’s and 30’s, they are riding bikes. I would say there are definitely more commuters than there were years ago.”

Brian Allenby, Communications Director of the Bicycle Coalition of Maine agreed that biking in Portland has gained popularity, “Cycling has definitely increased in the Portland area. Increasingly, people are choosing bicycling as their preferred method of transportation and recreation.

“Statistics have shown that car ownership amongst young people is down, and many of these non-drivers are now choosing a bicycle as their primary mode of getting to and from work, school and running errands.

“The continued increase in bicycle and pedestrian facilities and infrastructure in Portland also plays an important role ensuring that all riders, especially those who are less experienced, feel safe and comfortable on the road,” said Allenby.

Two avid bicyclists in the West End provide an excellent sample of millennials who typically chose to ride bikes in our city over walking or driving.

Each had their reasons for preferring to bike places in Portland. David Caron commented on his main reason: “First and foremost: to save time. Once the winter season is upon us, getting from place to place on foot is daunting and tedious – everything takes an eternity (especially the morning walk to work). Worse yet: walk up Munjoy Hill? Get real. We live on a small enough peninsula to get from one side to the other in twenty minutes, but there’s no way I’m walking that hill without complaining.”

Vincent Leonetti another bicycle enthusiast summed up his reasons for biking. “I bike for fun, cheap transportation, and it’s exercise.”