Bermuda Adventure – Beyond the Beach

Earlier this winter I was invited by the Bermuda Tourism Authority to learn more about the island as an “Adventure Destination.” This is the tale of my Bermuda adventure!

Bermuda is known around the world for its pink sand beaches, bright clear turquoise waters, golf courses, colorful architecture and sailing culture. But it is much more than that.

This is why I along with three other adventure travel advisors – all members of the Adventure Travel Trade Association and self proclaimed “Adventure Angels” – were invited, to experience a different side of Bermuda, “Beyond the Beach.” We arrived with great expectations for our four-day adventure. 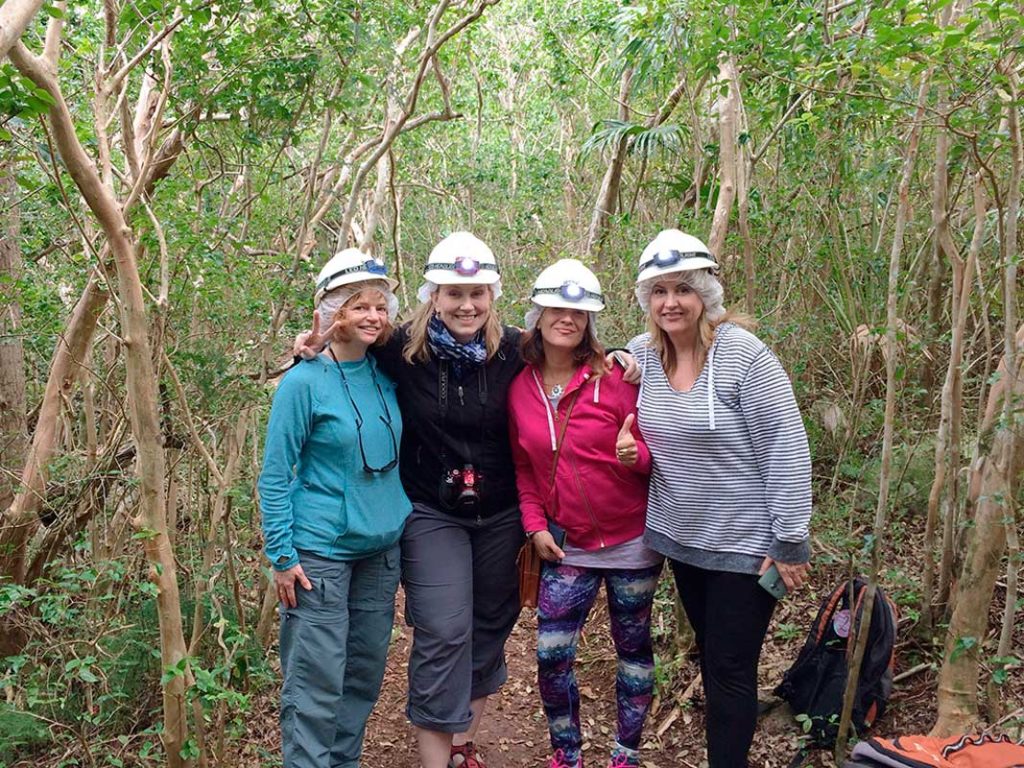 Our first stop was the Swizzle Inn where we were warmly greeted and treated to island inspired cuisine and their famous Rum Swizzle.  Established in 1932, “The Swizzle,” as locals call it, is Bermuda’s oldest and most famous pub!

Next up, a short hike and tour led by Hidden Gems. We explored hidden trails and underground caves, water holes, local flora and fauna.

Hidden Gems owner and our guide, Ashley Harris is a fourth generation Bermudian with a science education background.  Ashley started Hidden Gems, an all-inclusive island eco-tours company. She wanted to take her science knowledge outside more often. And as a plus, she gets to provide visitors to Bermuda with a different kind of experience. Together we explored some of Bermuda’s best kept secrets. 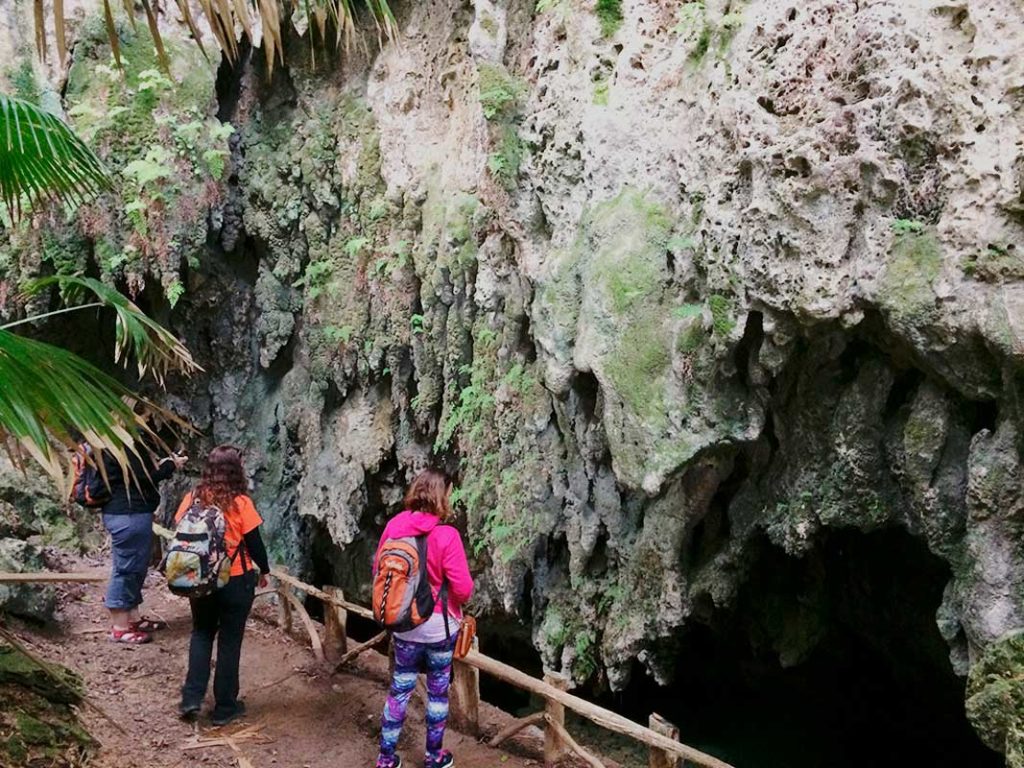 After a quick check-in and change at The Newsted Belmont Hills Resort, we were off again to the town of Hamilton. Here we enjoyed dinner and a pub crawl. Also, we joined up with Bermuda’s famous Town Crier, Ed Christopher.

Ed has been the Town Crier since 1994 when one of his first duties was to greet Her Majesty Queen Elizabeth II and the Duke of Edinburgh when they visited the City.

Ed rang his bell at each stop and announced our arrival! He led us around his beautiful city pointing out historical sites. Ed had many tales to share.

The group’s favorite stop in Hamilton, hands down was “The Spinning Wheel.” It featured friendly local characters, two dance floors, a well-stocked bar and jukebox – and even a laundromat! The owner was thrilled to give us a tour and show us his dance moves!

The next morning began with a traditional Bermuda Codfish breakfast. This consists of boiled and salted codfish! It is served with onion or other kinds of sauce, boiled potatoes, bananas, boiled eggs and slices of avocados.

After breakfast we stopped by the Bermuda Underwater Exploration Institute (BUEI). That day there was an America’s Cup special exhibit featuring a racing simulator, and a room with the largest shell collection I had ever seen! Their mission:

To advance the understanding, appreciation and knowledge of the ocean and to encourage the protection and preservation of the marine environment.

Off to rent bikes and participate in the “Re-Discover the Rail Trail” event. An event organized by the Bermuda Tourism Authority [BTA] with a host of activities to encourage more people to appreciate this most scenic of all bike trails! 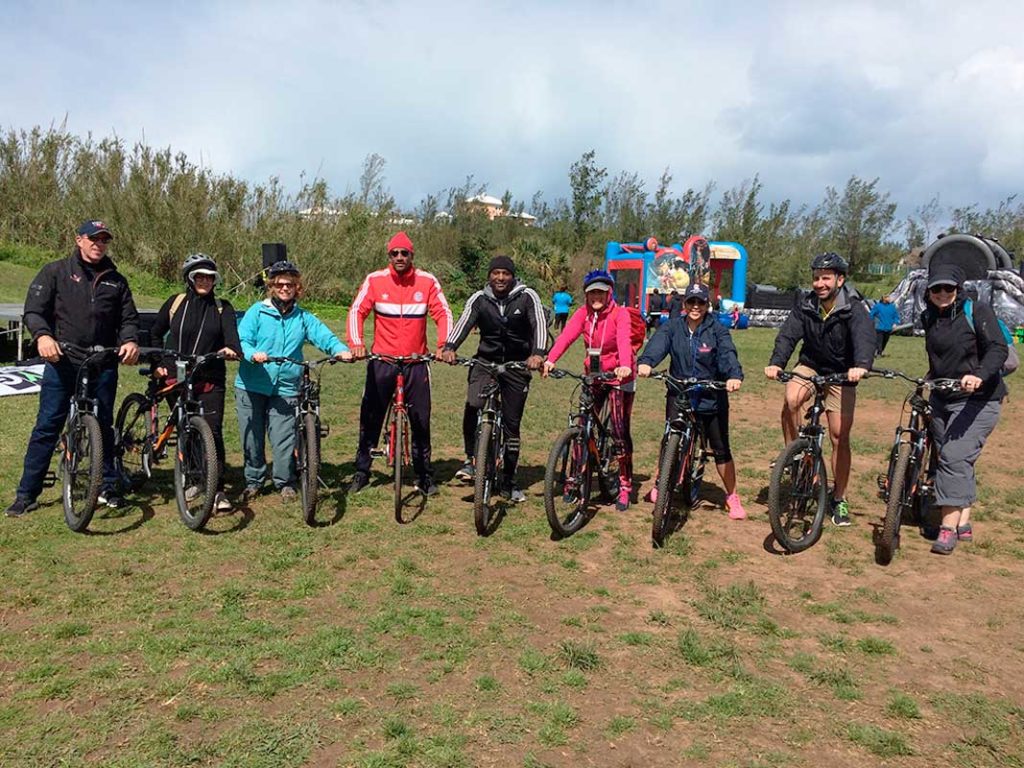 The event was well attended despite being the coldest day in Bermuda since 1962. The winds were gusting over 50 mph and temps were in the low 40s! With lively exercise instructors and music to get us ready, we warmed up and headed out on our bikes. And the best part, Bermuda’s Premier (aka President) Michael Dunkley joined us!

And after the ride, celebration continued at Bailey’s Bay Cricket Club with live steel pan music, a rum swizzle bar and a lively colorful performance by Gombey dancers! 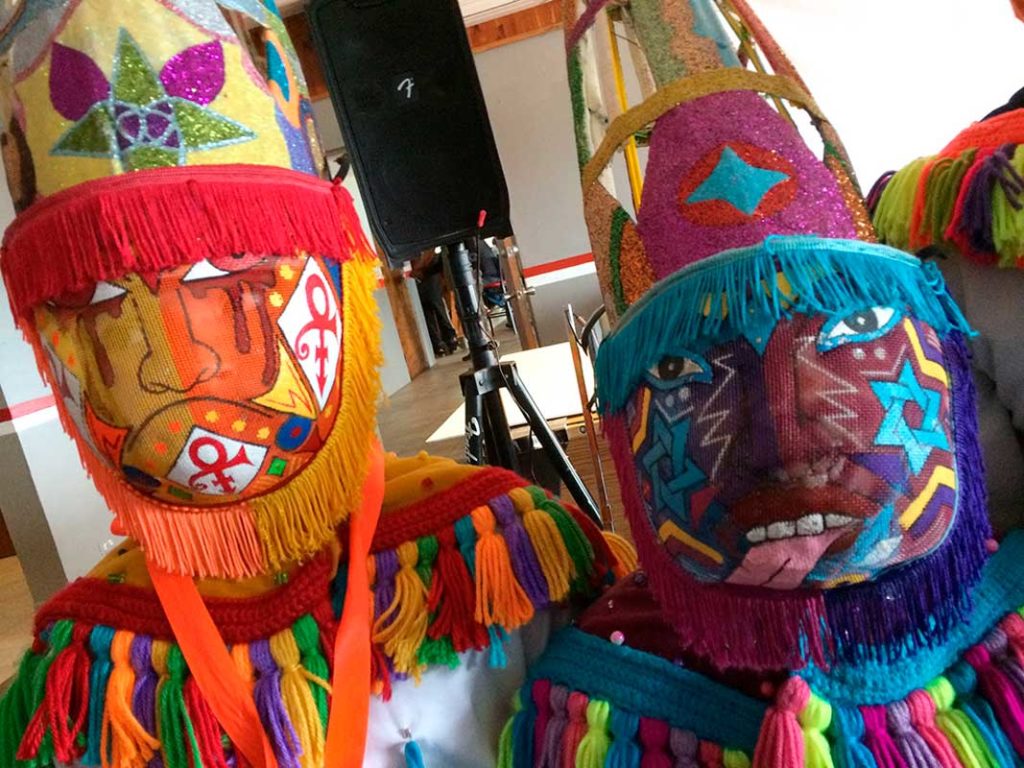 That may have been a full day for most, but we were not done yet.

On to the Crystal Cave!

Still on our bikes, we continued, now in the driving rain to tour Crystal Cave. The Cave was discovered in 1905 by two boys looking for their cricket ball that had fallen down a hole. More than breathtaking, the cave is an amazing natural beauty.

The cave features spectacular formations, white stalactites covered with crystals and a crystal clear underground lake. This one you have to see to believe! Photos don’t do it justice, but here is one anyway. 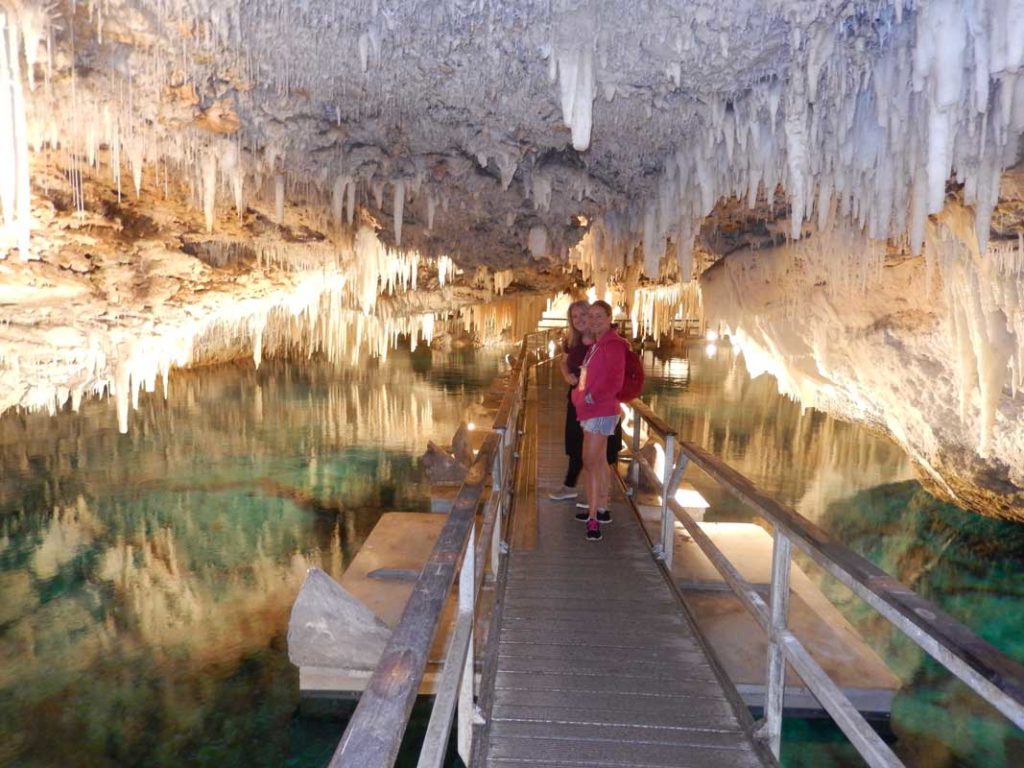 After another stop at the Swizzle Inn, we had a massage in the Spa Cave at the Grotto Bay Beach Resort. Then, we capped off our adventurous day with dinner at Beau Rivage. This is Bermuda’s authentic French restaurant, with award-winning, internationally acclaimed chef and author Jean-Claude Garzia! Tres bon!

We headed out to explore another side of the island. We enjoyed a picnic in the park and a walk about the town of St. George, a designated UNESCO world heritage site.

This is where the founder of Bermuda Sir George Somers and his men landed in 1609 after their ship Sea Venture was wrecked at a nearby reef.

Prior to this, Bermuda was uninhabited by humans.  Although used as a waypoint, Spanish sailors believed the island to be haunted and didn’t settle there. Turns out the haunting sounds were Cahow birds, not ghosts… 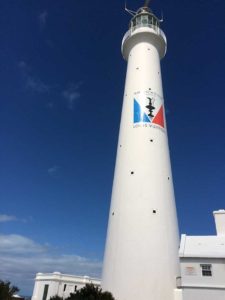 On my last morning I said goodbye to my fellow Adventure Angels, and I was treated to a private guided tour of the Royal Naval Dockyard. This past summer the dockyard served as the site of the America’s Cup race.

Following the tour, I did the steep climb up the 185 steps of Gibb’s Hill Lighthouse.

Still not done, after the lighthouse I visited Dolphin Quest, an educational, and inspirational interactive dolphin experience.

With less than two hours before my flight was to depart, my host Christi and our driver Larry decided we needed a fish sandwich from Art Mels for lunch –This is a fish sandwich like no other, piled high on raisin toast and one I would have gladly missed my flight for. 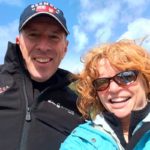 So now I’m in love!  I’ve been “Beyond the Beach” and my heart skipped a beat!  To quote Ashley from Hidden Gems “No matter the season, we will give you a reason to fall in love with Bermuda!”  I’m going back – Who wants to join me?

Nancy lives in the West End and is an independent travel agent at Adventure Marketplace.