Beating Back the Trump Attack 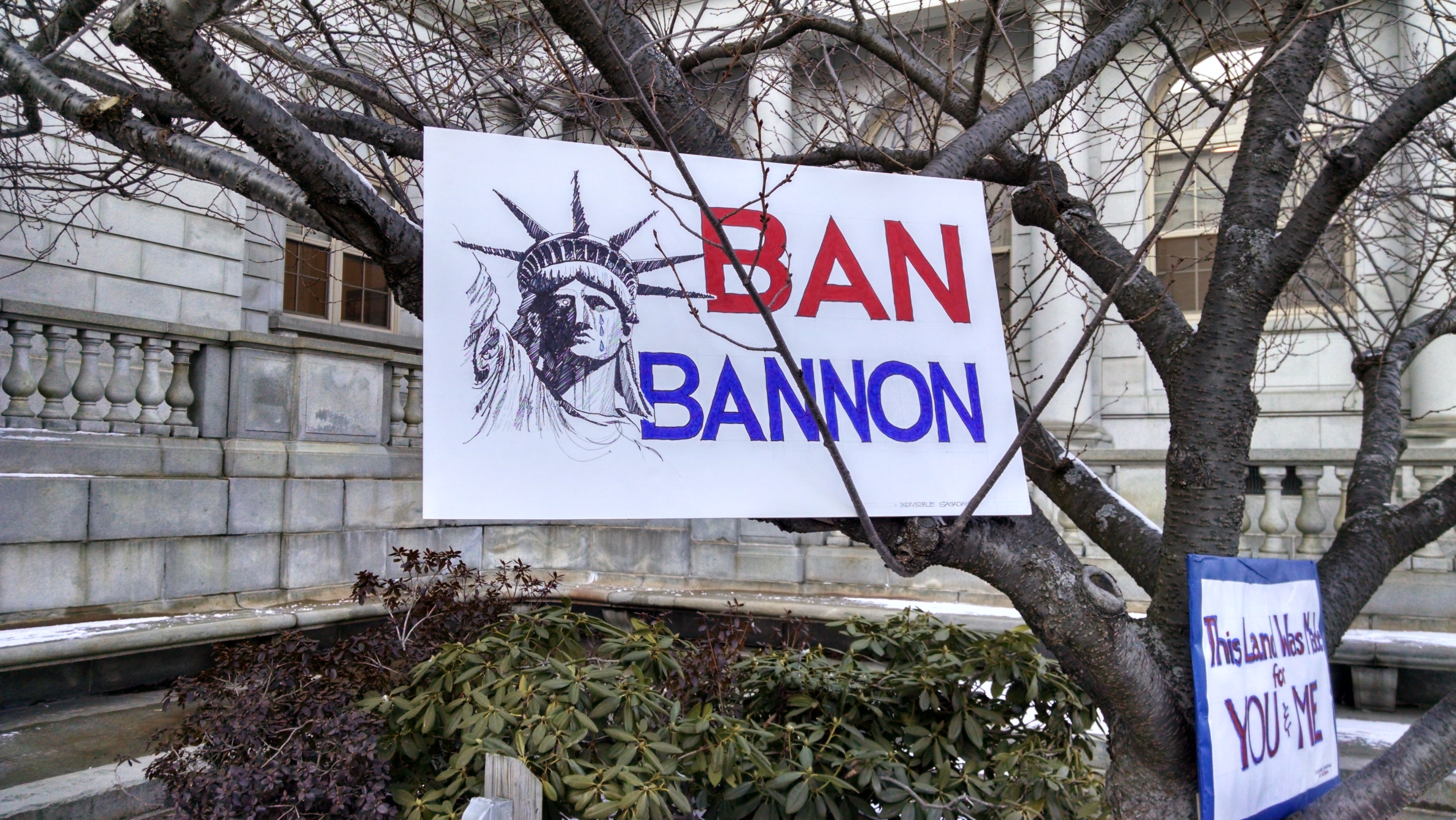 Well, it was bound to happen sooner or later: I have been reported to the FBI. Apparently, a reader believes my opinion column (which is clearly labeled “Commentary”) constitutes “sedition.”

I certainly hope this reader also reported President — err, I mean “White House chief strategist” — Steve Bannon to the FBI as well. After all, not only is Bannon on record as wanting to “destroy the state,” he also openly admits to being a “Leninist.” Talk about sedition!

(Like many Americans, Bannon seems to have a rather shaky grasp of Lenin’s actual politics. Lenin’s goal of “smashing” the capitalist state was one step in his ultimate blueprint for a socialist revolution. Bannon — completely ignorant of the state’s actual function — wants to destroy the state so capitalists can be free to continue ravaging the environment, looting the Treasury of taxpayer money, and exploiting workers in dehumanizing, low-wage jobs.)

In this brave new world of “fake news,” “alternative facts,” and Bowling Green Massacres, the lead editorial of the February issue of Socialist Worker observes that “two things have become clear.”

We have already witnessed what is hopefully just the beginning of that resistance.

Americans rightfully disgusted by Trump’s election wasted no time in demonstrating their discontent. No sooner had Trump recited the oath of office at his pitifully attended Jan. 20 inauguration, when a group of anarchists braved the tight security to mount a protest.

The very next day, half a million people descended on the nation’s capital for the Women’s March on Washington. This was by far the largest protest I have ever attended. In fact, the crowd was so unwieldy protest organizers abandoned their original marching plans at the last minute. But defiant attendees marched anyway, slowly snaking their way toward the Washington Monument before security stopped them.

Portland activist, Caitrin Smith led the Maine contingent of the International Socialist Organization (ISO) at the Women’s March, which she called a “transformative experience.”

“Once we arrived [in Washington, D.C.],” said Smith, “we were met by comrades [from] far and wide, who embraced us in tears, in chants of solidarity, in love and marched with us against our oppressors.”

Indeed, the ISO (which I am a dues-paying member of) proved one of the loudest, most galvanizing forces at the event. Even before the official proceedings began, we enclosed ourselves in a visible spot and launched into chants of “We do not consent!/Trump is not our president!” and “Black, Latino, Arab, Asian, and white/Unite!/Unite!/Unite to fight the right!”

Dozens of passerby jubilantly joined in our chants. Many of these activists likely do not consider themselves socialists. Some may even have a negative association with the term. This, I hope, is one small step in slowly changing people’s minds and winning them to radical politics.

Smith, who is a survivor of sexual assault, said her experience at the march gave her the “confidence to own this aspect of my identity.”

“The ISO has given me the opportunity to match tragedy with solidarity and oppression with resistance,” said Smith.

The Women’s March was followed by mass demonstrations in several major airports throughout the country in response to Trump’s Jan. 27 executive order banning refugees from seven Muslim majority countries from entering the United States. Nearly 2,000 protesters clogged the baggage claim at the Portland International Jetport in protest of the ban.

All of these mass demonstrations are immensely encouraging. Rather than feeling dispirited and dejected over Trump’s presidency and his frightening cabinet of racist, bigoted, billionaire swamp creatures, working-class people are resolved to standing in defiance of the administration’s agenda.

But it is not enough merely protest Trump at every turn. We need to completely dismantle the racist, misogynist, xenophobic capitalist system that spawned him. We need to offer working-class people — many of whom may have voted for Trump out of a legitimate feeling of economic insecurity —an alternative vision of society worth fighting for. We cannot, as Forecaster columnist Edgar Allen Beem does in his Feb. 6 column, simply write off working class Trump supporters as “brainwashed” ignoramuses.

Bernie Sanders gave Americans a taste of such a society — one in which health care is a universal human right; college education is not a luxury only the rich; and working people receive a living wage for an honest day’s work.

But even Sanders’ democratic socialist goals were limited in various ways. We can and should aim higher than those limitations. Those of us on the left should fight for nothing less than the self-emancipation of the working class from the exploitative forces of capitalism.

“If it isn’t clear by now,” Smith wrote in a post-march essay she shared with me, “Trump is coming for all of us.”

… We need a multi-racial, multi-gendered working class movement to stop Trump. A movement that has the power to build revolutionary socialist parties and organizations capable of overthrowing the capitalist system — and the oppression it relies on. We are a long way from that. We will lose a lot of battles. But we must stay the course [and] remain diligent in our work as socialists. This means we must continue to organize, agitate, and educate among ourselves on the long road to a socialist future.