The ACLU of Maine and counselfor Portland Police Officer Benjamin Noyes have reached a settlement in a lawsuit brought on behalf of a Bar Harbor couple who were arrested after attempting to observe and film a police interaction. The plaintiffs argued that observing and recording the police performing their work in public is protected under the First Amendment. 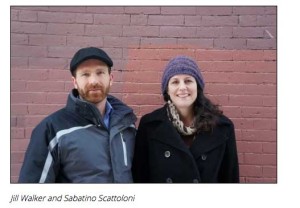 The plaintiffs in the case, Jill Walker and Sabatino Scattoloni, were visiting Portland last May when they observed an encounter between five police officers and one woman. Walker and Scattoloni decided to film the incident from across the street, and they subsequently moved closer to observe the police activities. Officer Noyes ordered the two to get off the sidewalk or face arrest. When Walker and Scattoloni asked the reason they would be arrested, Officer Noyes immediately ordered two other officers to arrest the couple.

“We decided to bring this case in order to help make it clear that you have the right to observe and record the police, as long as you aren’t interfering with their work,” said Walker. “We hope that nobody else will have to go through what we went through.”

Walker and Scattoloni were searched and interrogated without Miranda warnings and incarcerated until they could meet bail. They were charged with “Obstructing Government Administration” and obligated to hire a defense attorney. Ultimately, the district attorney dropped the charges.

The lawsuit charged that the actions of Officer Noyes violated Walker and Scattoloni’s First Amendment right to peacefully observe and record the police doing their job in public, as well as their Fourth Amendment right to be free from unlawful arrest.

In addition to the ACLU of Maine, Walker and Scattoloni were represented by Richard O’Meara of Murray, Plumb & Murray.

“The most positive outcome from the resolution of this case is that the citizens of Portland and future visitors to our city should encounter police officers who are properly trained to respect their First Amendment rights to observe, photograph and even video record officers in the performance of their public safety duties,” said O’Meara.

The terms of settlement in this case involve payment to both Walker and Scattoloni, as well as payment of attorney fees and costs to the ACLU of Maine.