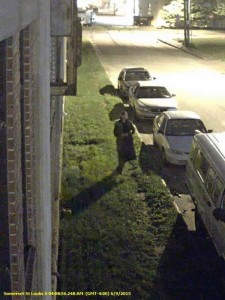 A security camera captured the image of the individual at approximately 4:08 a.m. on Somerset Street between Chestnut and Elm Streets.

On Monday night, the perpetrator(s) smashed the windows of each of the cars. They targeted cash, leaving other valuables behind. The Tuesday night car robberies were similar in nature.

It appears that multiple perpetrators were involved. At least one likely injured their self on Monday night, and left blood on some of the cars.

Police continue to investigate and are asking for more information from anyone that witnessed any suspicious activity.