“A culture of encounter demands that we be ready not only to give, but also to receive. Media can help us greatly in this, especially nowadays, when the networks of human communication have made unprecedented advances. The internet, in particular, offers immense possibilities for encounter and solidarity. This is something truly good, a gift from God,” said Pope Francis on World Communications Day last summer. 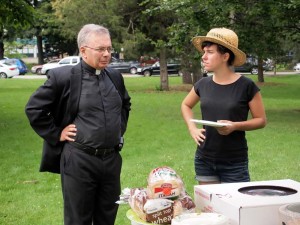 Continuing in that spirit, Fr. Mike Seavey is using the art of blogging to connect with Catholics and non-Catholics. Fr. Seavey is the administrator of Cathedral of the Immaculate Conception Parish in Portland and pastor of the other Portland Peninsula & Island Parishes. Visit the blog here.

“The blog gives me the opportunity to explain our faith but also to educate on Catholic teaching regarding crucial issues that are impacting many in our communities,” said Fr. Seavey.

In addition to posting weekly homilies, Fr. Mike has shared a seven-part series explaining the Catholic Church’s teaching on immigration; testimony he presented in Augusta regarding the issue of general assistance for refugees and asylum seekers; articles he has written for area newspapers; and an essay on the myths and realities of domestic violence. Here are a couple snippets from Fr. Mike’s blog:

On asylum seekers and General Assistance:

On the Fairpoint strike:

The Catholic Church has supported the rights of workers to form labor unions for 120 years. Pope Leo XIII began naming these rights as early as 1891 in response to the Industrial Revolution. And the Catholic Church has repeatedly renewed these teachings over many generations. A basic element of this justice involves the right to organize and form unions for collective bargaining. This is a fundamental human right and not merely a privilege offered by governments or society.

“At the start, I didn’t know what to expect, but the response from people to the homilies, entries, and special messages is inspiring,” said Fr. Mike. “As the Holy Father said, ‘it is not enough to be a passerby on the digital highways, simply connected; connections need to grow into true encounters.’”