As a lifelong walker of downtown neighborhoods in many cities, I’ve found that an eye for architectural beauty in unexpected and often rough places can be an ice-breaker. My interest in architectural oddities has often caught the attention of an area’s older residents, the kind of people whose stories can bring a neighborhood’s social history to life.

The story of how I happened to collect stories of Zack’s PHS Luncheonette happened just that way: I was walking down Cumberland Avenue one sunny winter morning in the 80’s, when I snapped the below photo of the porch next to Zack’s, across from the front of Portland High School.  I was excited by the columns’ unusually large and vividly carved capitals, which were my reason for taking the picture. 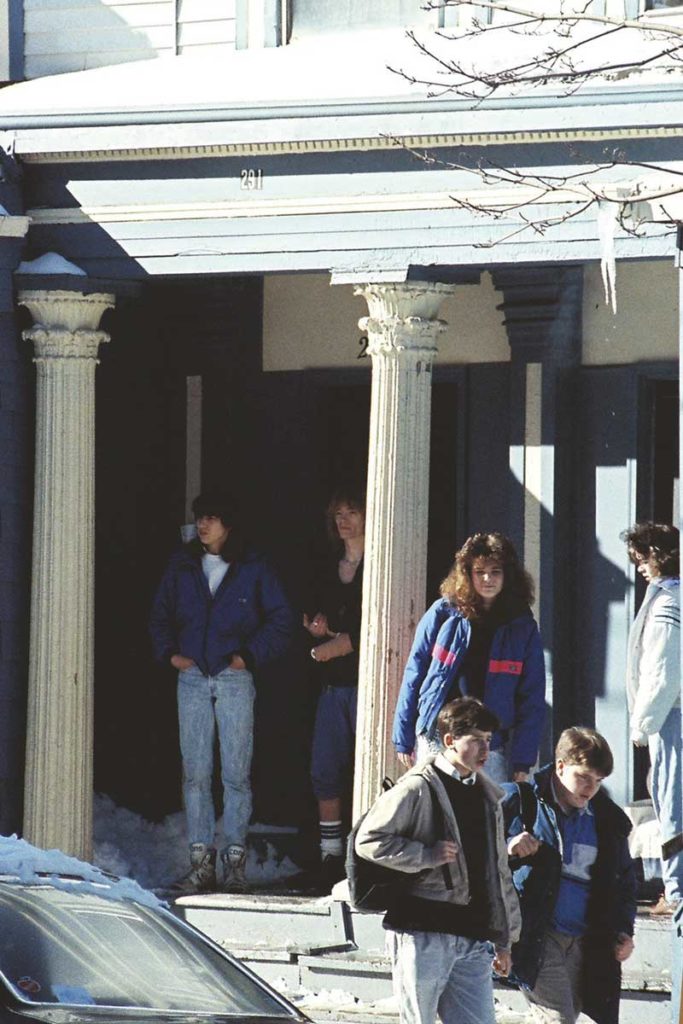 Front porch at 291A Cumberland Avenue next door to Zack’s taken in the 1980s. -Photo by Tony Taylor

Some years later a developer bought the house where Zack’s had been and wrecked the porch I’d photographed. At the time I made a desperate bid and succeeded in buying one of its columns from the developers.

Recently I posted my photo of the porch next to Zack’s on Facebook through the page, “Portland, Maine Encyclopedia of 60’s, 70’s and 80’s.” It helped me gather memories of Zack’s out of an astounding number of responses from folks who first went there as PHS students. It seems Zack’s breakfast and lunch place had a certain raffish mystique and was even feared by some. But by all accounts it was more of a social haven than many kids were able to find at school or anywhere else in the neighborhood.

Zacharias Mavodones and His Luncheonette 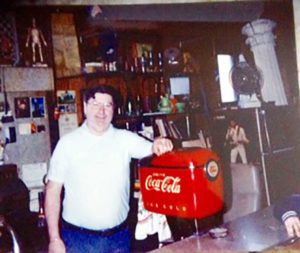 Zacharias Mavodones was the youngest of four brothers.  His parents, Michael and Catina Mavodones immigrated from Marmara in northern Greece.  They ran several businesses including the National Restaurant on Congress Street, one of the biggest in the city. The Mavodones opened PHS luncheonette in the 1950’s.  Late, in the 1980’s Zacharias took it over and renamed it Zack’s.

The site of Zack’s was originally a grocery store built in 1918 over what had been the front yard of an elegant 1846 Greek revival double house. The house’s front porch ended up in a slot-like opening sandwiched between two storefronts. The other half of the house was occupied by Cushman’s Undertakers, later a beauty parlor. Such stores, added to the fronts of houses on busy thoroughfares, were a common sight just as WWI was ending and veterans were flooding the streets looking for business opportunities.

Zack also bought the other side of the building, 289 Cumberland Avenue, and renovated it into apartments. He  ran  the  apartment house and luncheonette until he retired due to poor health in 1998 and sold the building.

“Oh yea, played pinball in there every day!  Was a definite hangout on the porch.”

I loved that place!  I think it was the first place I ran a tab.  Though it was for cheez doodles instead of beer.

Memories. Played pinball daily, ran a tab with Zack for burgers, etc.  When the principal or vice principal came to retrieve students, Zack would let them hide. I believe there was a door in the back that led downstairs. Students would hide there. Jukebox – always music playing and a foosball table.

My mom didn’t want me going there, it had a bit of a rep for a rough crowd (late 70’s), especially in the am! So I’d get out of mom’s car on the snowy days, go up the stairs of PHS, wait for her to be out of sight, then go straight across the street to Zack’s! We would smoke our cigarettes in there. Zack was a no-nonsense big guy. He’d surprise you with his big heart.

April Ingalls took her freshman sister and a lot of us newbies in there the first day of high school 1990 to play pool. I think my parents met there in the 70’s.

I spent a lot of time in Zack’s. He was a great guy. We knew we were safe there and he didn’t judge any of us. The jukebox was always playing. Zack had his favorite songs in the jukebox and we all knew the words to them by heart. Mainly ‘cause he’d share the cost to play music as long as we included a few of his faves.

It seemed that only kids with reps went there. My parents wouldn’t allow it.

Zack’s felt like a non-alcoholic Cheers – sitting at the “bar,” drinking the best hot chocolate and eating a dog for lunch. Zack made everybody feel welcome, but he didn’t put up with the ‘riff-raff.’  Always there to encourage you to do your best and choose a good path to follow.

Pinball, ten cents a game or three for a quarter – what a deal!

Zack called me ‘Sophie’ – he would never let anybody go hungry.

Pinball, burgers, and a great place to hide. I spent a good amount of time at Zack’s and he was a friend to all.

Isn’t that when the little Italian lady worked there? I hung out there waiting for the Elm Street roller rink to open.

I spent a lot of time there, always a rebel. It was a safe place for me 1971-1974. I hung out with the wild ones. Spare change on Congress Street…. We’d get a bottle of wine or beer and cigarettes. Remember hearing ‘Rockin’ Robin’ a gazillion times. My first touch of freedom. I took it and ran. Clean and sober these days. I know what it was like then; the person I am now is so different, thank God.

Wow this is amazing for me to read. Zack was my Uncle Zach; my dad’s Zeke Mavodones. Father is the oldest of the four brothers (Socrates, Nicholas, Zacharias). As a child we used to go into his luncheonette and I most remember playing pinball and asking my Uncle for a hotdog sometimes. The school administrators would let the kids go to Zack’s because it was considered safe. He was hardworking and joyous with a lot of funny stories to tell. We grew up in NY but visited Maine often. I miss my Uncle Zach to this day, but I have fond memories of hanging out there with my siblings.

This place was high school for many! Certainly more exciting and welcoming.

I skipped school and played pinball almost every day. Zack was a very cool guy. Friendly and soft-spoken. He treated the kids well.

NEXT MONTH: Learn the secrets of the house behind Zack’s and those curiously beautiful columns!

Tony is an architectural designer and sign artist who grew up in NYC, Hartford, and Worcester. A photographer and collector of architectural salvage since his teens, Tony became concerned about urban decay and became an advocate for saving architectural landmarks in distressed neighborhoods. He has written several articles and books on related topics.

Post updated March 23, 2017, for corrections, including Zacharias’ parents owned the National Restaurant not Zack as reported in the original post. Updated again on March 24th to reflect that Zack’s parents opened PHS Luncheonette in the ’50s and Zack took over and renamed it in the ’80s.