Posts
Home Cause Blog A Win for Labor in “Trump Country”

A Win for Labor in “Trump Country” 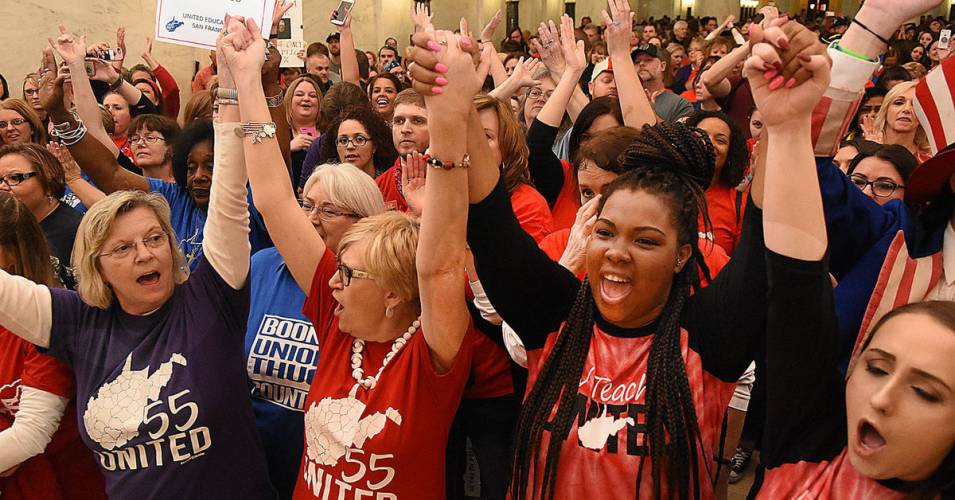 The successful teachers strike in West Virginia that resulted in a five percent pay increase for all of the state’s public workers is a major victory for the labor movement — the first such victory in a long time. Strikes like this one can give confidence to workers in other states and in other industries. After years of inactivity and workers feeling demoralized, could we be witnessing the rebirth of the U.S. labor movement?

The strike was a decade in the making. For years teachers in West Virginia public schools have been grappling with overcrowded classrooms and underfunded budgets — largely the result of then-Gov. Joe Manchin’s 2008 corporate tax giveaways, which left little money for education.

The nine-day wildcat strike was the longest strike in West Virginia history. (A “wildcat” strike is one undertaken without the official support or approval of the union leadership. West Virginia is one of 28 “right-to-work” states throughout the country.)

Teachers in West Virginia are among the lowest paid in the country.

One of the most notable aspects of the strike is the teachers’ ironclad discipline. Numerous times throughout the strike, Republican-turned-Democrat-turned-back-to-Republican Gov. Jim Justice offered the teachers minor concessions or halfhearted promises. Yet each time the teachers rejected nothing less than their initial demand of a five percent raise — which benefits all state workers.

“We were not ready to return to the classroom just on a promise,” said Katie Endicott, a high school English teacher in Central Mingo High School, during a recent interview on Democracy Now!

Endicott spoke about the importance of the strike:

The significance of the teacher strike cannot be underestimated. Though West Virginia has long been the site of major labor struggles, as Eric Blanc writes in a story published in both Socialist Worker and Jacobin magazine, there is something different about this most recent strike.

“This strike was statewide, it was illegal, it went wildcat, and it seems to be spreading,” Blanc writes.

West Virginia’s upsurge shares many similarities with the rank-and-file militancy of the late 1960s and early 1970s. But there are some critical differences. Whereas labor struggles four decades ago came in the wake of a postwar economic boom and the inspiring successes of the civil rights movement, this labor upheaval erupted in a period of virtually uninterrupted working-class defeats and economic austerity.

Readers would be excused for knowing little about the strike. The corporate media — including “liberal” outlets like the New York Times, NPR, and MSNBC — all but ignored the massive strike. This is, perhaps, further proof that it is not the media’s lies of commission (or “fake news”) that has left working-class citizens ignorant and disempowered. Rather, it is their lies of omission.

Indeed, the victorious teachers strike and the strict discipline with which it was carried out seem quite at odds with the picture the capitalist media frequently paints of “red state” West Virginia. During the 2016 presidential campaign reporters seemed to hold up West Virginia as the poster child for the so-called “white working class”: Ignorant, reactionary, racist, and full of rage at Washington elites like Hillary Clinton that had thrown them under the bus. Donald Trump received more support from West Virginia voters than from any other state.

While that working-class rage is certainly real (and, I would argue, justified), striking teachers like Endicott are about as far from your average Trump supporter as you can get.

Furthermore, the media’s one-sided portrayal of West Virginia (“Coal Country”) as the heart of backward, white working class despair ignores the state’s volatile history as the focal point of decisive — and often violent — labor clashes. Those clashes include the Battle of Blair Mountain in Logan County, in 1921, which was the largest, most violent labor uprising in United States history.

The Battle of Blair Mountain was the culmination of a years-long struggle between the coal companies and miners — most of whom lived in company towns and were paid in company scrip rather than actual U.S. currency. The coal companies had carried out a series of assassinations of union activists, hiring the Baldwin-Felts Detective Agency and other citizen-led militias to do their dirty work. When 13,000 armed miners seized Blair Mountain, the coal company called in the National Guard to crush the uprising. Over 100 miners were killed, while nearly 1,000 were later indicted for murder and treason.

Like so much of this country’s bloody labor history — easily the most violent in the industrial world — the Battle of Blair Mountain has been conveniently scrubbed from high school history textbooks and popular culture.

Could the teachers’ strike be the beginning of a return to West Virginia’s radical labor roots? Already, teachers are poised to go on strike in Oklahoma, Arizona, and New Jersey. And they are no doubt taking cues and gaining confidence from West Virginia.

Yet, just as labor seems on the verge of a long overdue comeback, the state is prepared to deliver what could be the final blow to union organizing. The right-wing Supreme Court is currently debating the constitutionality of mandatory union dues in the case, Janus v. AFSCME Council 13. Should the court declare such dues unconstitutional, unions will be virtually destroyed. The entire United States would effectively become a “right-to-work” country. Such a ruling would constitute the culmination of the capitalist state’s decades-long assault on labor and the working class.

So what lessons can the left draw from West Virginia’s victory? Blanc outlines a few in his article. Chief among them is that “class struggle gets the goods.”

In stark contrast to labor management’s decades of cooperation with employers, which has only led to concession after concession for workers, Blanc writes, “… the bottom-up militancy and strike action of West Virginia’s teachers and school employees has reinvigorated working-class organization…”

From day one, the active participation of rank-and-filers — and their remarkable ability at critical junctures to overcome the inertia or compromises of the top union leadership — has been the central motor driving West Virginia’s strike forward. Through the empowering dynamics of mass struggle, many individuals who only two weeks ago were politically inexperienced and unorganized have become respected leaders among their co-workers.