USM Future To Be Decided in Fort Kent 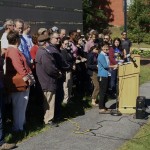 USM Future held a press conference in early September to ask trustees to hold their meeting in Portland.

The University of Maine system will be having an important board of trustees meeting on December 22nd, in Fort Kent. On the agenda at the meeting are program cuts to the University of Southern Maine that include eliminating staff and programs in American and New England Studies, the Arts and Humanities at the Lewiston campus, and Geosciences.

Students for USM Future, a group of students and faculty who are fighting the cuts, held a press conference on September 12th, to urge University officials to hold the trustee meeting at USM, where it was originally scheduled. “Students and faculty have a a right to speak,” said Meaghan LaSala, a member of USM Future.

The meeting was originally scheduled to be held in Portland, but in June of this year it was moved to Fort Kent. Dan Demeritt, the director of public affairs for the University, and former director of communications for Gov. LePage, said the meeting was moved for weather considerations. “The decision has been made, and the meeting is going to happen [in Fort Kent],” Demeritt said.

“The change was made after students and faculty left for the summer,” noted LaSala.

It is more than a five-hour drive to Fort Kent from Portland, but organizers with USM Future said there will be sponsored buses to help concerned students and faculty make the trip.